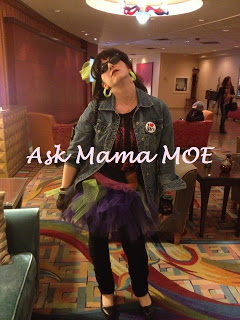 I am a fan of the 80s. There, I said it. I can’t be sure why, except for the fact that it was bright and happy and bouncy, and for a kid, it was a great era to live in. So when I found out ShesConnected was having a 80s theme party during the conference weekend, I was excited! Ask anyone and you will know I put my heart into the outfit and pumped everyone up for a good night!

Now, if any of you have been following me on Twitter or have liked me on Facebook, you know the tutu pictures have surfaced. Above is what I looked like.

The amazing tutu I wore came from Little Beaux Peeps. The designer, April Connor, made this for me is very short notice and I was thrilled she was able to do it! This costume got me first place in a tied win against a long legged beauty that was dressed like the chick from Flashdance. Of course, I don’t think you could compare the two, so we both won!

Leading up to the SCCTO weekend, I was listening to some 80s music and it was transporting me back in time! I started dancing in the kitchen and when another song came on, I immediately looked over at my husband and said, “Oh! Remember this one??!” His face would cringe and mine would gleam!

So when we sat down for dinner one night, I thought I would let the kids in on my happy dances to songs they hadn’t heard before:

You know those songs mama has been listening to?
Yeah
Well when I go away this week, there will be a party that mama can dress up for.

Well, when mama was a little older than you, this music was what I listened to and we dressed really different then with bright colours and…

You want to dress up, mama?

Um, yes, honey. It’s like a costume party and we are going to dress up from that time (they still don’t know what eras are).

See, people dressed differently in every time of the world… (I was losing them at this point)

…yes, like cavemen, exactly! They were the first people to have clothing and they dressed really differently then.

Mama, they took the fur and skin of animals and made them into clothes! (Said my enthusiastic five year old)

(Frown appearing on one little one’s face) you want to dress like a caveman mama?

No! No, honey, it was just an example. I am dressing up like how I dressed as a young girl.

Well, it’s a party and it’s fun to dress up for…

(We already established that)

Why are you going to dress like a caveman?

Mama, can we listen to other music now?

I guess I will have to wait a little longer before I explain to them how excited I was to get all dressed up for the 80s party at SCCTO. But hey, it was worth a shot! I may very well be the only one in my home who loves the 80s but I was thrilled to share the 80s love with some of my blogger friends!

I thought I would have a hard time finding clothes and accessories since I didn’t save any of my 80s treasures. Well, boy was I wrong! Everywhere I went, I saw 80s stuff. It’s freaky, actually. It turns out all the top fashion designers have paid homage to the 80s era for their spring/summer 2013 collections. I’ve had fun looking at the fashion shows online, while at the same time trying to figure out what we were thinking then and why we are bringing this fashion back! At any rate, it got me in the groove for the party and for Halloween! I might as well get two uses out of my outfit, right?!

Hallmark Gifts for the Holidays

Love Is In The Air…

A Special #HolidayWish For YOU

Your Caveman costume rocked! 😀
I was wondering where the heck you found that tutu. Very cool of Little Beux Peeps to custom make it for you.

How did I miss the connection between you and “Cindy”? Which by the way, I have been referring to you as such for two weeks. Glad to put a name to a face. You’ll always be Cindy to me…

Besos, Sarah
Zookeeper at Journeys of The Zoo

Thanks, Deanna. hardy har..caveman…what can I say? My kids have a way with words! 😉

Hey Sarah,
I like the name Cindy 😉 I think that will remain my nickname for sure! At least from you, mama!