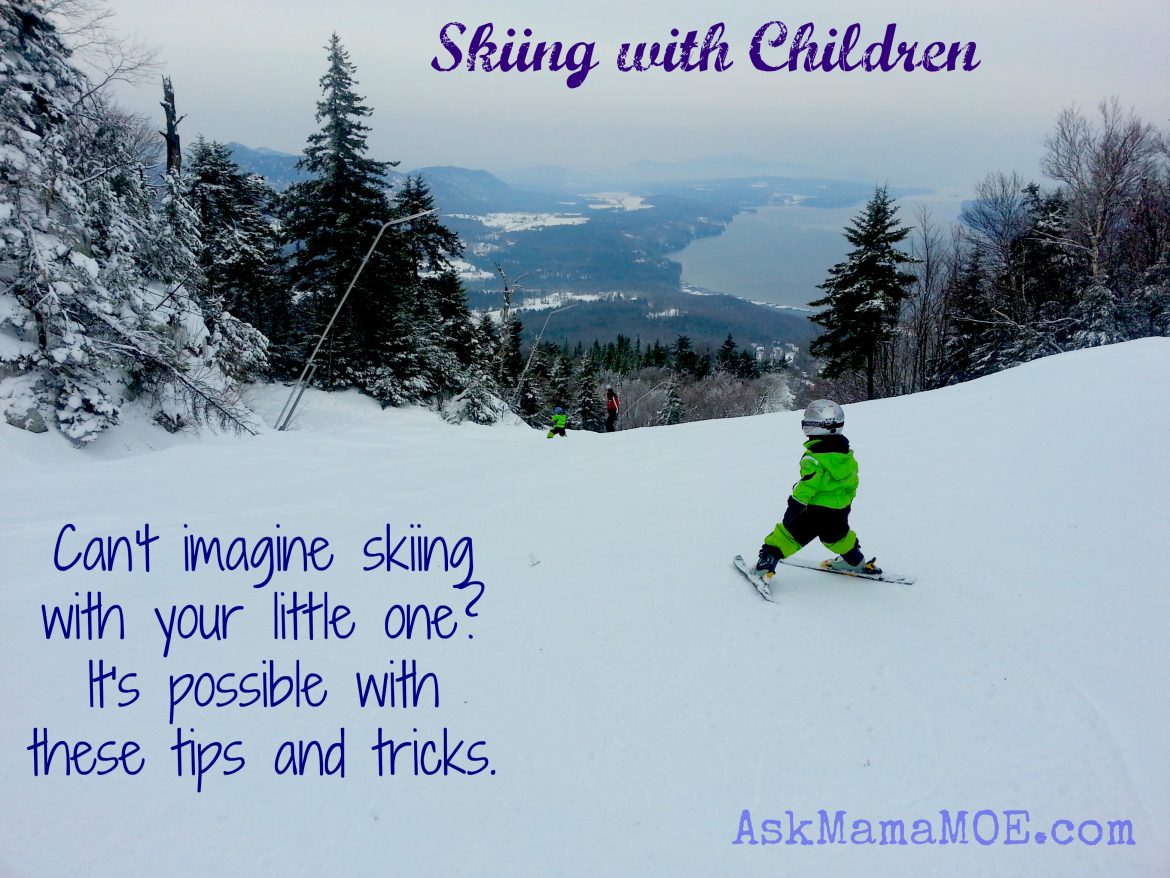 During Papa MOE’s college and university years, he was a ski instructor.

“World renown…” he is adding in the background as I type.

As I was saying, Papa MOE was a ski instructor for eight years. When we met each other, he was on his way to St. Moritz for the season to teach there. It was his goal…

Ok, it was his sabbatical before starting work after university.

“I’m waiting for your questions” he says.

A lot of people ask me when is the best time to start skiing with your children. My first reaction would have been…

“Never” he pipes up.

“That’s not true, I would say maybe eight, or nine years old.”

But Signor Papa MOE had our children on skis at two and a half years old. I’m. Not. Kidding.

It had everything to do with his confidence in the sport. I learned to ski when I was in high school, whereas he started at four years old. When I met him, he was able to ski backwards.

He literally was as comfortable skiing as he was walking.

So, for him, taking them out early made sense.

“But the hassle, the temperature, the snowsuits!” I would say.

“That’s not a problem” he’d say. “You have to pick the fun days when it’s not too cold, so the children enjoy it and it becomes a fun experience.”

“I mean, I would say three years old is probably better.”

“So why did we start to so early?”

“Because of me. And them. They were strong enough at that age to open their legs and snowplow.”

So depending on the strength of your child, starting that early can work.

Here are some tips from Papa MOE when starting to ski with children: 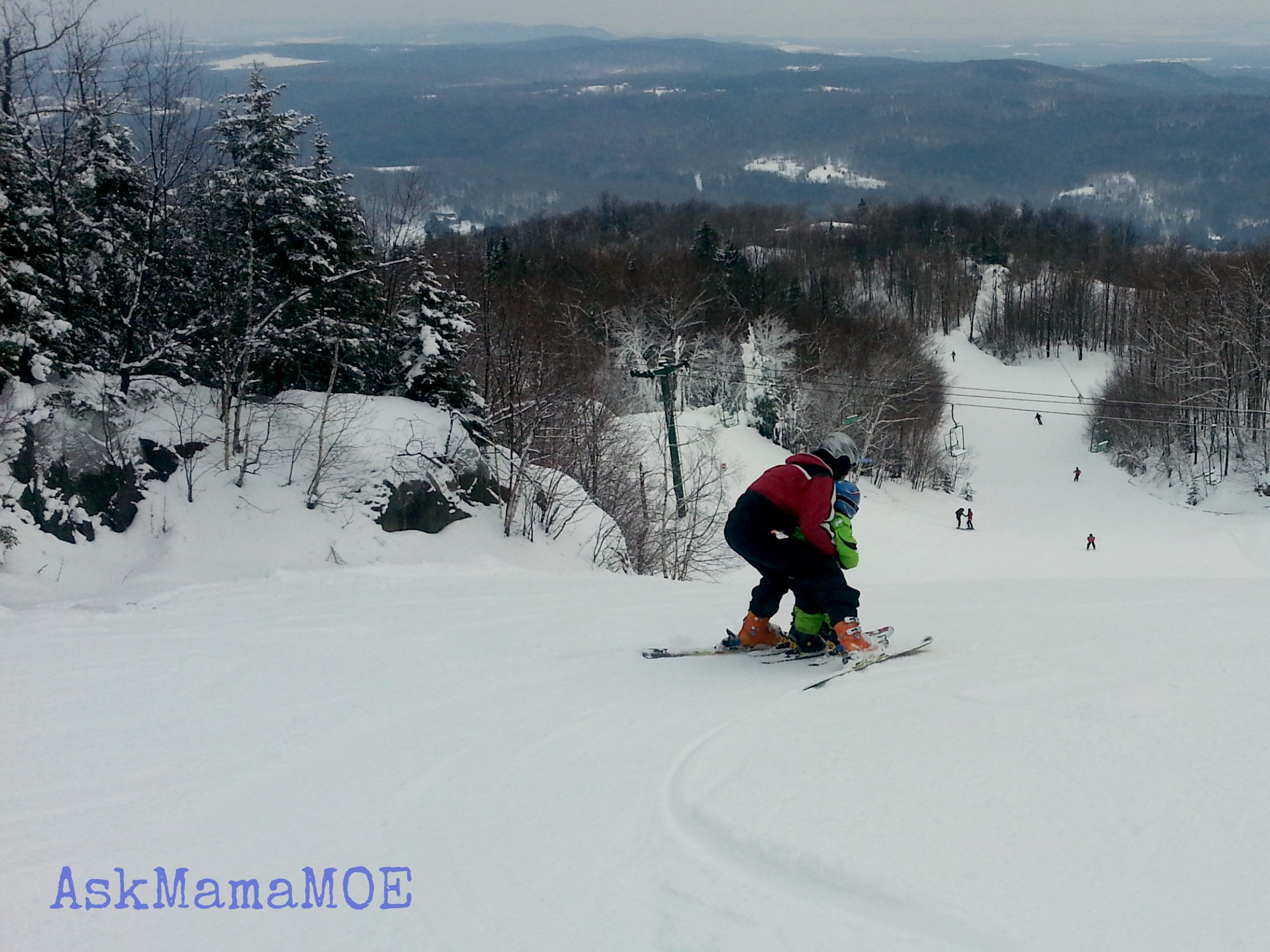 Papa MOE and the twins

“If you can ski backwards, you can teach your child to ski” he says.

“What?! I never met anyone who skied backwards so you can’t tell them that.”

Someone like me who can ski but is not the most confident, should sign up their children for a class. If you are like Papa MOE that is seriously experienced and (uber) confident, you can teach your children.

If possible, signing your child up for weekly classes the first season is ideal. Otherwise, intensive one week program during the March break or Christmas holidays is good too.

If you’re doing it yourself, Papa MOE says the moment they can stop by themselves and are somewhat confident, you should bring them on the chairlift. After, bring them back to the magic carpet so that they feel confident and proud of how well they are doing.

Keep it up as a family activity every weekend that you can, to encourage their development. It’s great family time and before you know it, your child will be skiing right beside you, or even a little ahead!

“Is there anything else you want to say?” I ask.

“Don’t forget the hot dogs and French fries at lunch.”

For the record, I pack a lunch in a cooler, complete with snacks, juice, napkins and wipes. It saves us money and time in a big lunch line-up. We keep the cooler in the locker areas with our winter boots.

Another tip from me is to stop before your children get exhausted. Mornings are always best and when they are very young, the sport will be more about the process than the skiing. If you can introduce skiing in steps, and in decent weather (difficult these days in Montreal!), your children will learn to love skiing and it will become a family outing you will love forever.

So what about it? Have you gone skiing with your children yet? Do you plan to? I’d love to hear from you in the comments below (and I’m sure Papa MOE would like some feedback too!).

A Special #HolidayWish For YOU

Love this Mama Moe!! Am planning a post of my own having just gotten the kids on skis way later than Papa Moe would have suggested…I think I’m going to have to include the link to your post in mine! Now back to that idea of sabbatical…..

We are skiing the whole family every Sunday and while the kids are in lessons in the afternoon, hubby and I can ski alone. This is awesome. Our three kids are comfy on skis and we have lots if fun as a family. So question for Papa Moe : which slopes are the best for families? We looooooove Habitant! Not too much west islander, good hill but not too big and great ski school! And you?

Hi Gab,
If you are looking for a great family-friendly ski hill, Papa MOE highly recommends Owl’s Head. Another good hill is Sutton. 🙂