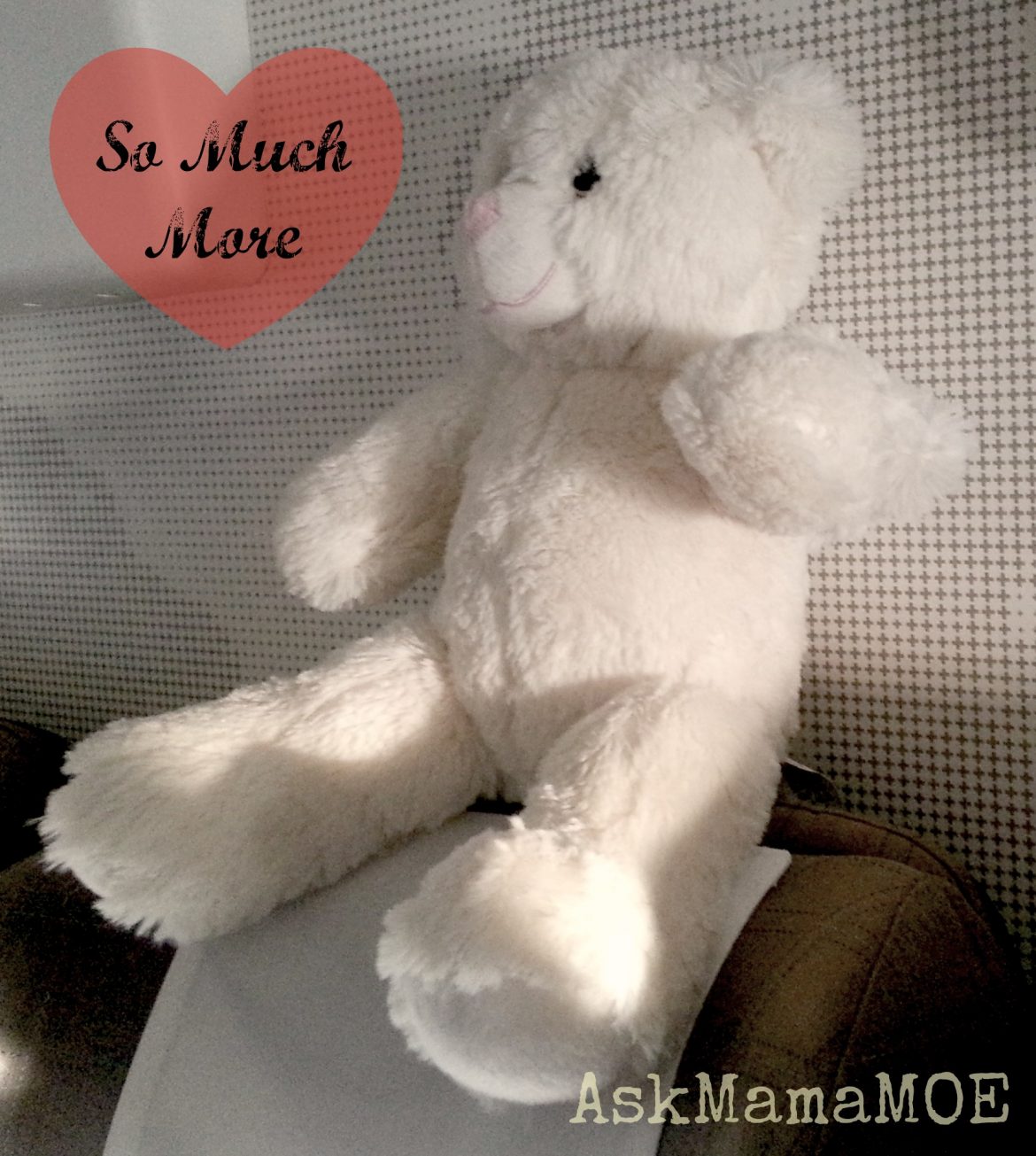 It was two weeks after my mother passed away. I was a mess. I was listening to her phone messages over and over, and I was so very sad. In two weeks my twins and my oldest would have their birthday. I did not want to party.and I knew they would be missing Grandma MOE on their special day. She spoiled them something crazy for their birthdays.

I called up my friend, Xenia Paterson, owner of Teddy Bear Loft, and asked her if she had any special teddy bears. After looking at her collection, I found the perfect one: a plush white teddy bear with soft angel wings. I ordered three as well as three sound chips.

As soon as they arrived, I hid them from the children, and when they were not home I took all three sound chips and got to work. Each sound chip received a different recording of Grandma MOE’s messages to them on the answering machine. Since our oldest is the voice on our answering machine recording, Grandma MOE always left messages directly to him and the twins. I couldn’t think of anything better to gift them.

It came to me like a lightning bolt, almost as if my mother was guiding me to do it. On the morning of their birthdays, I had all three bears stuffed and ready for hugs. I told them Grandma MOE did help me make these, and that any time they missed Grandma and wanted a hug from her, they could hug their bear and hear her voice.

Their eyes lit up when they hugged each bear for the first time. And they keep their bears in a special place in their rooms. And every now and then, I hear my mother’s voice in the house, and know they are missing her.

A Family Visit to the Grévin Wax...

Movie Event in Support of a Mama’s...

Happy Anniversary To Me!

This is so sweet, Julia. What a nice way to honour your mom for your kids.

Thank you, Rebecca. I’m happy I had the mindset to do it at the time.

omg what a wonderful gift. julia you touched my heart again.

Thanks, Olga. That means a lot.

Julia, this is such a beautiful post. I CRIED reading this. What a special thing to do for your little ones. I think I may follow your lead and get one for Little One. She’s been telling me that she really misses her “Great-Lola” a lot these days.

Thank you, Christine. If you can do it, you should. At first I was nervous on how they would react, but they love their “Grandma bears” so much.

There are so many family voices I wish I could here again…what a wonderful idea. Thank you for sharing this very personal story. Xo Xenia

You made it all possible, Xenia! Thank YOU for the beautiful bears and for helping me get them on time for the birthdays.

Indeed a very beautiful post. I cried and cried. I wish I had a recording of my dad’s voice for my boys. You are oh so clever! Grandma MOE is smiling somewhere!

Thank you, Jeannie. I swear my mother helped me with this idea. Thank you for leaving this comment, sorry I made you cry!

Instead of braiding our palms, since we cannot have new blessed palms this year, we are going to try and make green gimp bracelets instead. Happy #PalmSunday everyone! #Hossana askmamamoe.com/palm-…