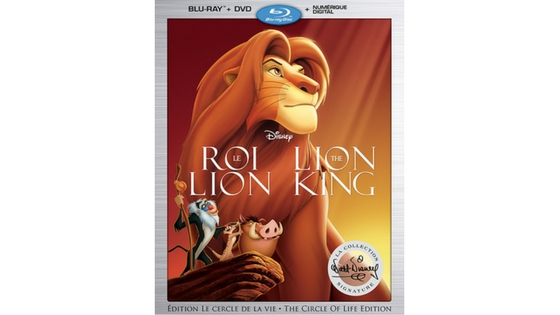 The Problem-Free Philosophy is now out of the vault and part of the Disney Signature Collection.

My Dad was way beyond his time. You know the trend now about unicorns, right? Well my Dad had a unicorn on his business card. I mean, come on! Not only does that take serious guts, but it is just plain awesome. To be able to feel so confident, enough to emboss a gold unicorn on your business cards decades before people put unicorns on everything…so cool. Yep, that was my Dad.

His other favourite animal was the lion; the king of the jungle. And because of the old nursery rhyme, The Lion and the Unicorn, he had a few really cool pieces of artwork with both animals together.

To me, I saw my Dad like the Lion; strong and brave, wise and patient. He was the rock of our family and the one who grounded us all. So, of course, 23 years ago, when I was just a teenager, and The Lion King came out in theatres, we were the first to go see it as a family.

Like so many other families then, we fell in love with Simba, and all the animal friends he made. The music was infectious, the animation was captivating and the story was filled with happiness and sadness. A true family classic was made the moment it came out. We bought the album and sang all the songs together, and my Dad proudly wore the baseball cap with the quote “Remember who you are” embroidered behind it.

Now my children are of the age where they to can enjoy The Lion King and the first time we watched it I cried. I cried when Mufasa died and because of the words he said. I remembered my Dad, and his strength. With both my parents gone, parenting can really pull at my heartstrings. And this Disney movie has so much meaning to me it was impossible for me not to cry!

Yes, long before “Let It Go” my childhood anthem was “Hakuna Matata!”

The Lion King is an explosion of African culture both musically and visually in the from of Disney animation.

New to the Disney Signature Collection

Now available on Blu-ray, you can bring home all the wonder of The Lion King for your family. One thing I absolutely loved about being at the Disney Social Media Moms Celebration was getting to know the backstory on the amazing animations and films that Disney brings to life. With the Blu-ray copy, you will have over three hours of extra footage sharing the making of the film. After attending #DisneySMMC twice, I can tell you that every single aspect of a film is done with such through and detail. Being able to watch the making of the Lion King is something I know I’m looking forward to.

To learn even more about what is available on the Blu-ray copy, visit my friend (and fellow #DisneySMMC mama!), Elayna’s post over at The Positive Mom.

It is with great pleasure to offer one of my readers a copy of this DVD combo pack, with thanks from Promo Avenue and Disney Studios.

This giveaway is open to Quebec residents only. To enter, please leave a comment below to let me know what your favourite Disney character is from The Lion King is and why. Can you guess mine? The deadline to enter the giveaway is Monday, September 4th at 11:59pm. Good luck!

I think this is a wonderful animated film to get the school year going, don’t you? We all need a little bit of “no worries” attitude when it comes to starting new school years, growing and changing.

Good luck, everyone, and “Hakuna Matata”!

Topiary Treasures at the Epcot Flower and...

Mine was Pumbaa. When I was much younger when this movie came out, he and I unfortunately shared, um, a similar body shape.

Shenzi…those Hyenas were such a trio that stands out for me from that movie. Crazy bunch.

Simba was mine. Cute, young and innocent. I liked several of them.