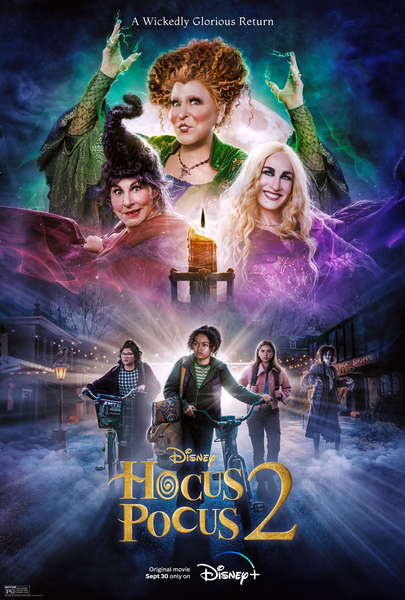 Are you ready?  Hocus Pocus 2 will be available exclusively on Disney+ September 30th! I had the delight to pre-screen this movie before its release for review.

Children from 1993 have grown up with love in our hearts for one of the best Disney Halloween movies, Hocus Pocus, and now we can celebrate the sequel to the movie with our children. And dare I say it, the sequel is more appropriate and even more fun than the original. You will have to watch it to judge for yourself. In this Hocus Pocus 2 movie review, there are no spoilers, as always, and I let you know if this movie is safe for children.

What is Hocus Pocus 2 About?

As written in the synopsis, It’s been 29 years since someone lit the Black Flame Candle and resurrected the 17th-century sisters, and they are looking for revenge. Now it is up to three high-school students to stop the ravenous witches from wreaking a new kind of havoc on Salem before dawn on All Hallow’s Eve. After a long wait, the movie was a labour of love and made possible because of the fans and their relentless requests for a sequel. Hocus Pocus 2 has everything and more when it comes to a long-awaited sequel. The story takes us right to the start of the Sanderson sisters and their journey into becoming the three most famous witches of Salem.

I usually love to share the trailer of the movie I am reviewing, but I decided to only share the teaser because the full trailer gives a few things away that will be fun to see in the movie as it happens. Instead, just watch the movie with your family! So that leads me to the most important question…

Is Hocus Pocus 2 Safe for Children?

As I hinted above, I think if you compared both movies, Hocus Pocus 2 might even be safer than the original movie for children. It’s no secret that movies from the 90s hit differently for many reasons, but mainly because there wasn’t the same level of appropriate content as there is today. If you are a childhood fan of Hocus Pocus, watching it today as a parent, you notice the subtleties that would most likely not necessarily be accepted in today’s family-friendly movies. And if there is anything that is blatantly inappropriate for young children in the original Hocus Pocus movie, it is part of the plot – the Sanderson sisters need a virgin to carry out their spell and live forever. I can tell you as a parent to tweens watching the movie the first time with them, I remember being asked “what is a virgin?” during the movie. As always, I answered my boys with real answers. Very young children might miss it entirely, but older children will have questions.

In Hocus Pocus 2, they discuss this important aspect of the Sanderson sisters’ arrival in 1993 Salem, and the way they handle it is priceless (and appropriate for young children). I loved that Disney dwelt with the topic instead of sweeping under the rug. It was clearly a subject that was often brought up about the first movie, so it was good that they included it with a little humour. That said, the topic does come up again in the movie so you may have questions. 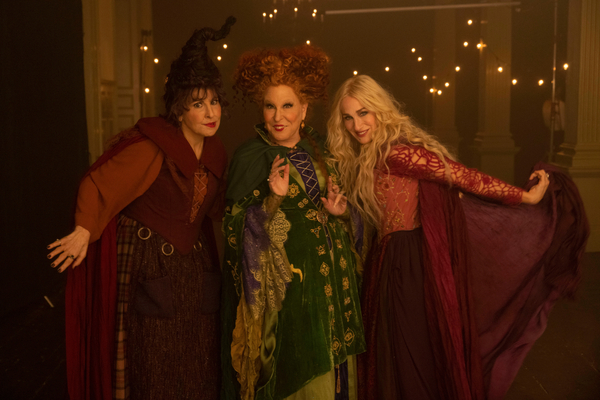 If you are expecting Hocus Pocus 2 to be light and fluffy, then yes, your children will be scared. I mean, Halloween movies are meant to be creepy and scary, and Hocus Pocus 2 has all of that in a family-friendly themed storyline. Bottom line is that the Sanderson sisters are witches that want to eat children. Plus, there are scarry characters that return in the sequel such as Book (the spell book has a single eye on the cover that moves) and Billy, a friendly zombie that has his lips sewed shut. There are more gruesome characters and a couple of scares that are made humorous with characters screaming in fright, but this is still a Halloween movie, so being frightened is part of it.

When it comes to how much your children will be frightened, that is very individual. As I have written before, some children are watching films (cough, cough Marvel) that even I don’t really like as an adult due to its level of darkness. While others can be scared at far less scary things. You know your child better than anyone, so take this information as a prep kit for movie viewing.

Who Stars in Hocus Pocus 2?

I am so happy all three actresses; Bette Midler, Sarah Jessica Parker and Kathy Najimy reprised their original roles as Winifred, Sarah and Mary Sanderson. The sequel just would not be as incredible if they did not, and I don’t think it would have happened! Other cast includes Sam Richardson (who plays Gilbert) Doug Jones (who plays Billy), Hannah Waddingham (who plays the mother witch), Whitney Peak (who plays Whitney), Belisa Escobedo (who plays Izzy), Lilia Buckingham (who plays Cassie), Froyan Gutierrez (who plays Mike), and Tony Hale (who plays mayor Traske). Expect some Easter eggs in the film that will delight all Hocus Pocus die-hard fans. 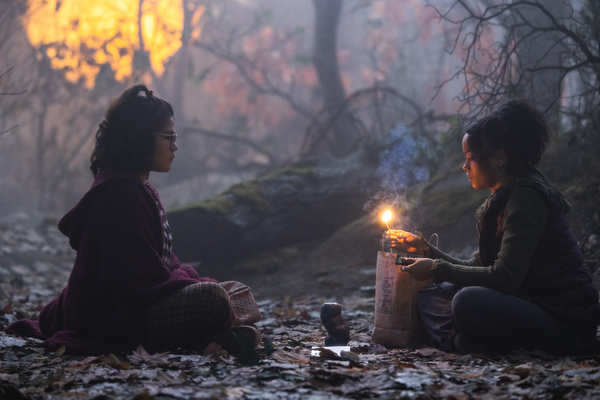 What You Will Appreciate in Hocus Pocus 2

The movie does not change the rhythm and ambience of the original first movie. For that reason, Hocus Pocus 2 connects so well to Hocus Pocus. While time has passed, the places are the same, just updated to today. That includes funny bits about social media, AI and technology in general. Adding these new things to a classic tale makes the audience relate to the film with the jokes.

What I appreciated in this film was diversity; something that was missing in the first film, again with relation to 90s movies in general. Now, girls, women and ethnicities are strongly celebrated (as they always should be) in Hocus Pocus 2. What’s more, the young trio of women are smart and compassionate, all in a scary Halloween movie. Yes, friends, it is possible.

Yes and no. You most certainly can watch Hocus Pocus 2 without seeing the first film. There are explanations for everything, so it is possible to watch only Hocus Pocus 2. However, you will not be able to get all the references, find the special Easter eggs, or even have a super fan love for the characters if you don’t see Hocus Pocus first. In the end, it is for you to decide. I personally would make a double-feature movie night during this Halloween season and enjoy both films.

For the fans of Hocus Pocus, you are in for a real treat with Hocus Pocus 2! I have a strong feeling that Hocus Pocus 2 will live on just as much as the first film and hopefully will include a third film in the future, to make it a Halloween trilogy.

Hocus Pocus 2 will be available as of September 30th exclusively on Disney+. 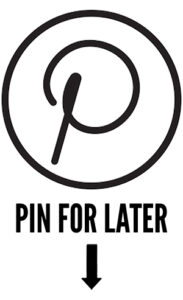 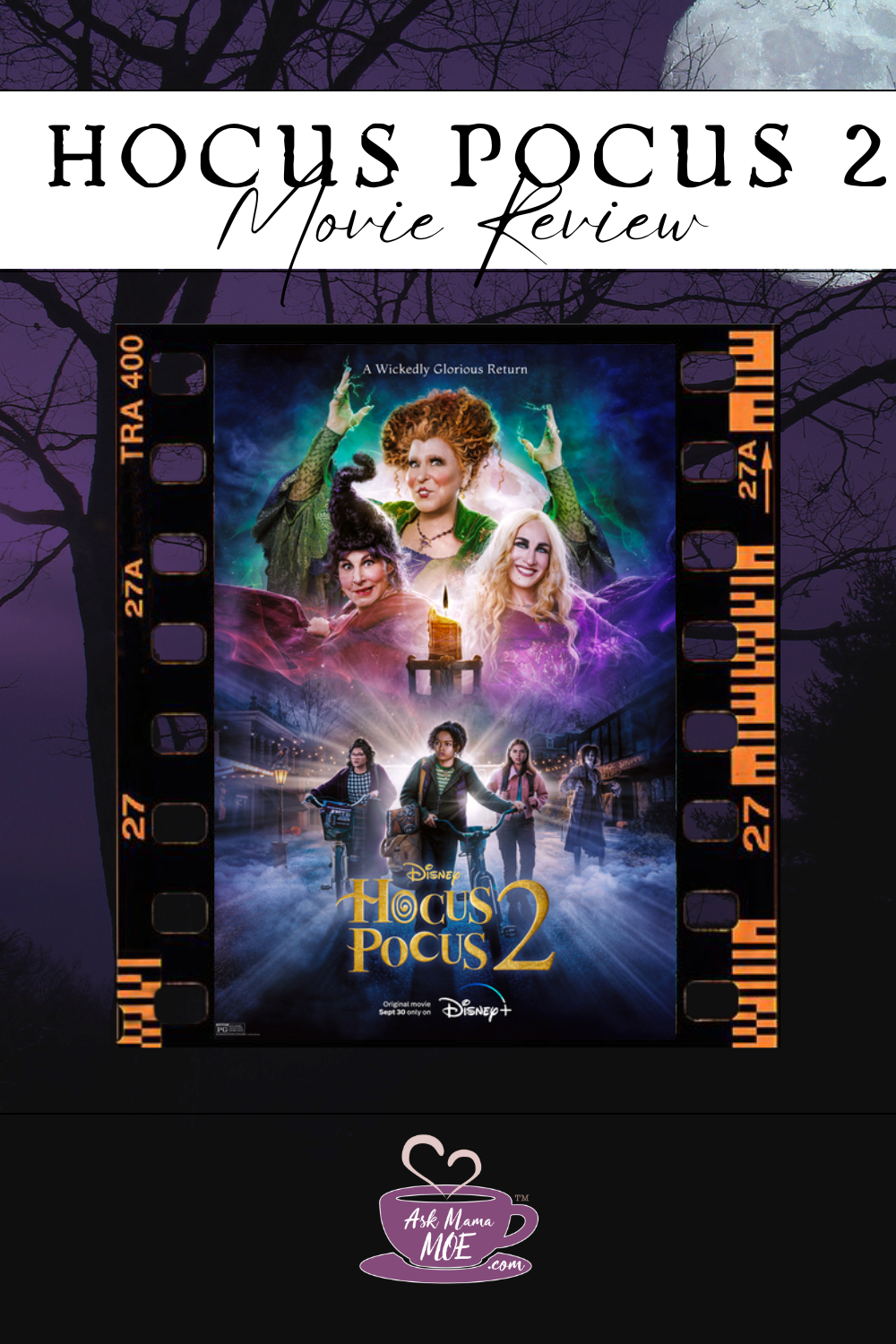