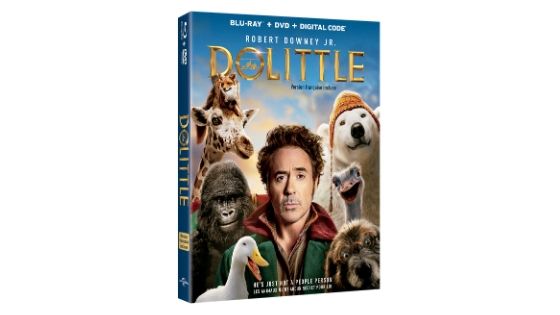 My boys and I really enjoyed Dolittle with Robert Downey Jr. when we saw it in theatres. If you are looking for a movie that is family-friendly, filled with wonder, and takes you away in your mind on a new and exciting voyage, this is it.

Dolittle whisks you away and shows you the impossible is possible: talking to animals can be done. For every child that talks to their pets, and for every adult that does as well, Dolittle answers the questions we all wish to know – Can they understand me? And what would they say back? It’s a lot of fun to see Robert Downey Jr. in this role and I can only imagine how much his creativity had to sore to pretend animals were all around him when there was nothing. It’s a testament to what a talented actor he is.

Here are some thoughts on the movie (written with the help of my boys):

All the characters were funny – Each character has a real personality, and they shine in various scenes. Animals that would normally be enemies in the wild, are or become friends. And the way that Dolittle talks to the animals is so matter of fact, you would swear it was real. Loads of fun to watch.

Scary part for little ones – As with most PG movies, there are a few bits that will be scary for little ones. Without giving too much away, there is a fight scene with a tiger and Mr. Dolittle, and there is a dragon scene that is intense as well. Another thing to note, is that there is mention of Dolittle’s wife and her death. So, dealing with depression and dying are discussed in a simple but real way.

Looks can be deceiving – Dolittle provides a teachable moment. The gorilla is easily scared, and the polar bear is always cold, and what you would imagine an animal to think and feel is not the case in this story. Even though this is a story about animals, it’s a great discussion to have after with your family.

With CGI movies like this, getting the inside scoop on how they did it and what they created to make the movie is really interesting. That’s why we are looking forward to seeing it again and watching all the extras on DVD. Here are the bonus features included in on 4K Unltra HD, Blu-ray, DVD and digital:

One lucky family will win a DVD copy of Dolittle to enjoy at home!

To enter, leave a comment below telling me your favourite animal you would want to talk to and be understood. That’s it!

** For all extra entries, you must leave your handle (and link for tweets) in a comment below for verification.

Must be a Canadian or U.S. resident. The deadline to enter is May 20th, 11:59pm. The winner will be notified by e-mail. Good luck, everyone!

How To Teach Our Children To Be Anti-racist (part one)

Keeping Kids Busy On The Break

I would want to talk to dolphins

I shared on my IG stories ( IvyMandias )

My favorite, and would love to understand is a koala

I would want to talk to penguins!

I would like to be able to talk to cats.

I subscribed to the newsletter.