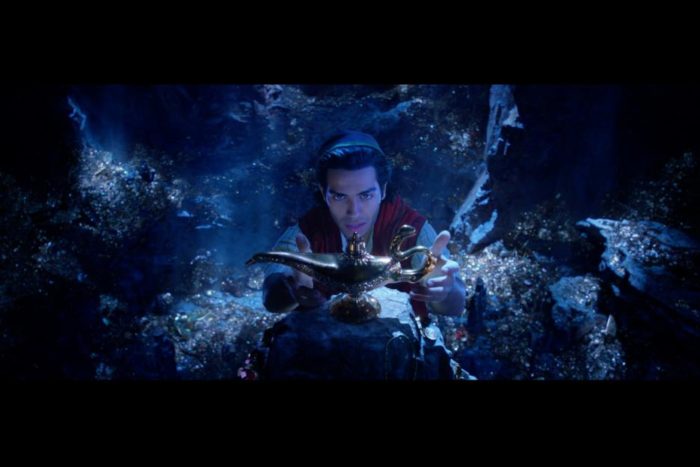 The time has come in my blogging career where I get to have real conversations with my boys as to why they like or do not like a movie. Where once it was simply “I liked it!” has turned into full-blown conversations as we leave the theater and drive home, and on into the next days following.

So, I felt it appropriate to share their take on what they felt about Aladdin with you. Many of you, like myself, search for no-spoiler reviews that are honest, with enough information to let you know if the movie is not only worth your ticket purchases, but also safe for your children.

That is our ultimate goal with this review. No spoilers here, just true feelings about what we loved, or not, about the movie. Here we go.

Can Aladdin really show us the world?

I mean, we all know the story, we know the characters, and the magical bits in the original animation…could they be as amazing in a live-action movie? Umm, yeah. 100%.

A unanimous “this movie was awesome!” was the first response I got from all three of my boys as soon as the credits ran. Diving deeper into why, it has a lot to do with the amazing effects in the movie. A flying carpet is no longer an obvious green screen clip with a fan blowing actors hair…there was so much detail to the movie, you felt like you were taken to Agrabah from start to finish.

One of my boys mentioned it made him feel like he was on the Soaring ride in Walt Disney World during the movie. If a movie can take you “on a magic carpet ride” (for real), you can believe this is a spectacular feast for the senses.

Remember the song “Prince Ali” in the original animation? Remember how grand the 1992 animation made Prince Ali’s entrance, with animals and gold camels and the hundreds of people marching and singing? Well, I bet in 1992 they weren’t thinking of making the live-action one day and so this was a challenge to create the same amazing entrance in a live-action movie.

But with 250 dancers, 200 extras, a 37,000 flower heads for a giant camel, the musical number came to life and then some! Shot over three days with seven cameras, the number only lasts for a few minutes…but oh my goodness, we loved it! We wanted to watch it over and over again! In fact, the boys have been singing that song nonstop since we saw the movie. 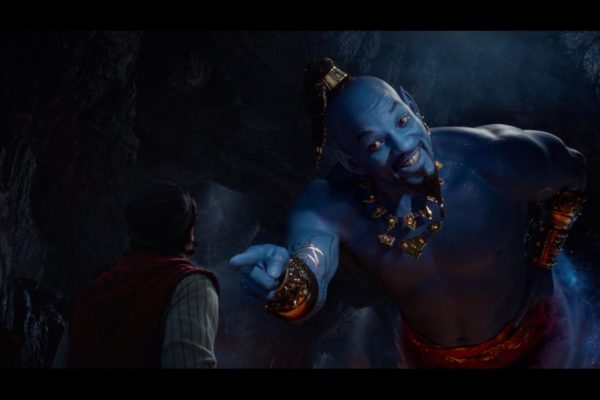 As a mama who saw the original Aladdin cartoon animation in theatres I can tell you Will Smith, as much as I already loved him, had a VERY tall order to fill in the shoes of the one and only Robin Williams. As for my boys, they had zero knowledge of Smith and already loved Robin Williams for his character voices in the animation. So, their standards were high as well, as to how Genie would be in the live-action.

As I suspected, Will Smith made the character his own, with new flare and charm. It took seconds for my boys to love him (obvs) and they agreed the characters were “both Genies but different and both awesome”.

“This Aladdin is better than the original. The special effects are cooler and it’s amazing how they used modern music (beat boxing) to enhance the original music. They gave the original story a twist, without ruining the original story. Will Smith was incredibly talented and hilarious! He really did a good job of doing a new spin on the Genie character that Robin Williams made famous.”

“I loved the scene when Aladdin (played by actor, Mena Massoud) was inside the cave with the Genie. The magic carpet has found his own personality in this film, and it’s funny to watch!”

From one of my twins:

“I liked how the Genie added beat-boxing into the original song, Friend Like Me. I’ve been learning this song on the piano, and it was fun to hear it with more instruments, and in a different way.

And I liked Abu, the monkey. He had character!!” 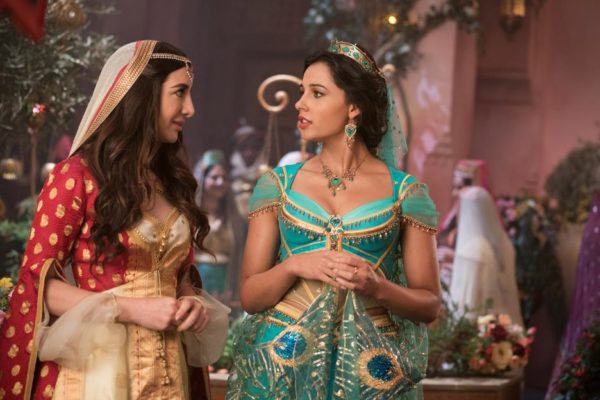 Who Run The World

A new character is introduced in the live-action Aladdin movie. Dalia is Jasmine’s handmaiden in the film, unlike the animation where she has a few. Dalia is my absolute favourite character in this live-action movie. I have watched Nasim Pedrad on Saturday Night Live and New Girl, and I absolutely love her facial expressions, comedic timing and wit that make a scene pop.

“Dalia was waaay better than the original three handmaidens that Jasmine had. She gave the role of the handmaiden some personality and created friendship between her and Jasmine that was not there in the animation.”

The fact that my boys fell in love with a new character, as well as new additions to the story-line which we will not divulge, says a lot about the strength of the movie as its own version of Aladdin.

The strength of women is felt in this new story even more so than the original. Princess Jasmine is a true character of strength and courage that young girls can look up to. I am also happy to mention this is the most diversely cast film in Disney history (yes!).

From my twins: “I didn’t like that they sped the film up when they were dancing.”

In some scenes the filming has been sped up or slowed down. This was actually a choice made in production by director, Guy Ritchie, to make it look fresh.  Most likely, you will notice it since it was done on purpose, but it doesn’t ruin anything.

Is It Safe for Younger Kids?

If you are concerned about taking your children to the live-action version of Aladdin in theatres, there are a few things to consider.

First, if they have seen the original animation, they know the story. For the purpose of knowing scarier characters like Jafar, and what they do in the story, it helps children to be prepared.

An additional scary moment is created with Jafar’s parrot, Lago. He has a new scene in which he chases Aladdin and Jasmine. Without giving anything away, Lago is transformed into a scarier parrot. For that, you can prepare your younger children and just like the original, know that there is, of course, a happy ending.

With the same tone as a musical performance and the animation, Aladdin has zero swearing or sexual content, but my guess is that the PG rating comes from the violence and the swords in the movie. I will say there wasn’t any one part that my boys were nervous or scared about.

When it comes down to it, you will love this new Disney movie. There was a lot of criticism going into this movie when Disney shared their first pre-trailer way back, which was a shame. Because this movie has something for everyone, and I would bet that the buzz now will be on awards…

Expect all the things you love about Aladdin, the action, the music and magic and the stories of friendship, strength and true worth of character.

Live-action is a different version of a story and there is a feeling that you get from them that is not at all like the animations. It is part Broadway, part high-level visual effects and together, it makes a magical combination unlike either on their own.

Let me know what you think of this live-action Aladdin.

Disclosure: My family and I were invited to the pre-screening of Aladdin to facilitate this post. All opinions are honest and my own. Images courtesy of Walt Disney Studios.

Henna: Montreal Artist Explains This Art and Why You Should Try It

I really want to see this in the theater! Thanks for the great review. I was on the fence about taking my younger two, but I think I’ll just take the oldest to see this one. They have a hard time sitting through movies at the theater and haven’t seen the original (yet!).

Enjoyed reading the review. I can’t wait to see this.When it comes out in DVD I will be getting a copy.

I have to see this movie. I remember when the first one came out. LOVED it! I would love for my boys to see this one with me.

One of 7 YouTubers I love for making me smile and helping me move! youtu.be/f6wm2g682JM #stayhome #homeworkout

I finally wrote my thoughts down, and they came out in a letter to the world. #StayAtHome #StayAtHomeSaveLives askmamamoe.com/dear-…