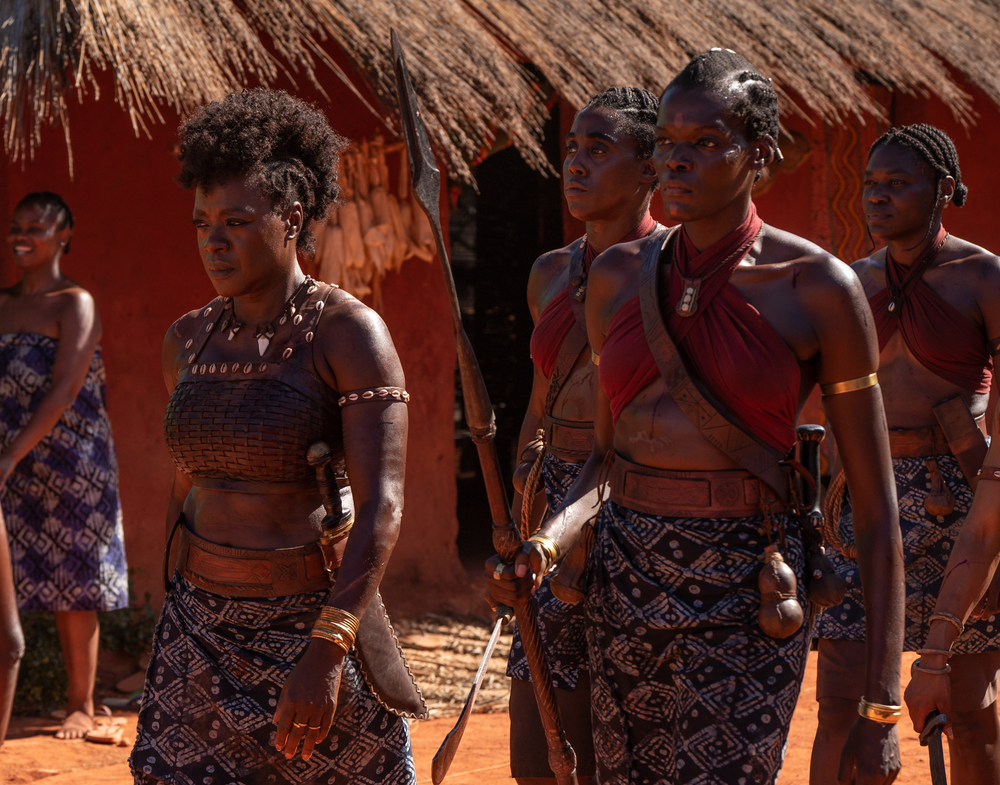 Out now, The Woman King is a triumph of female strength and power, with a story most likely new to many about the real women soldiers in Africa that fought for their freedom. Is it appropriate for children? Can you bring the whole family? I let you know in this review.

I have never loved war movies, but I have seen a handful to learn more about certain historical moments in time. As well, movies give you an added depth to the realness of any war that history books cannot. Directors and actors pour their heart into films to portray the atrocities that have passed, and with any luck, the audience is moved to a level of outrage and sadness allowing us as a humanity to not allow it to happen again.

I had the privilege of seeing the pre-screening of The Woman King with two other powerful, amazing women in my life. I decided to go with women for two reasons; one, I was not sure how detailed the gore and ravaging of war would be in this movie, and two, I wanted to appreciate the movie with women my age that could relate to the feeling I might be having while watching it.

We came semi-prepared with some knowledge of the real story. We also brought tissues.

Here is the synopsis:

The Woman King is the remarkable story of the Agojie, the all-female unit of warriors who protected the African Kingdom of Dahomey in the 1800s with skills and a fierceness unlike anything the world has ever seen. Inspired by true events, The Woman King follows the emotionally epic journey of General Nanisca (Oscar®-winner Viola Davis) as she trains the next generation of recruits and readies them for battle against an enemy determined to destroy their way of life. Some things are worth fighting for…

Friends, this movie was beyond epic. I found myself at times clenched in my body from top to bottom, watching with anticipation what would happen next. I went in knowing the movie would have graphic and disturbing scenes, so I was prepared to see things I normally do not enjoy on screen. Although those scenes were difficult to watch, this movie brought everything and more, allowing me to truly enjoy it. There was both monumental strength and courage, as well as heart and connections. The story, the acting and the sheer force that was put together in The Woman King was impeccable. I loved it.

Is this movie for kids?

I’m going to come right out and say this – this movie is NOT for young children. Of course it isn’t, it is a movie about war. That didn’t stop some parents from bringing very little children to the pre-screening, but you are hearing it from me, this is an adult movie. That said, I would not exclude this film from teens and here is why.

Do you know how many movies there have been made about war? Well, when I researched, I found that for the second world war alone, there have been over 1300 movies made. In the same research, I found top 100 lists and…I know this is a shock, very few movies about women soldiers.

Top listed brutal war movies ever made include Braveheart and Saving Private Ryan, both of which my teen boys have seen. Why? Because they are in the in that stage of wanting to see war movies with drama, suspense and fighting. And while this is definitely not my jam because I do not need the stress of watching killings on the big screen thank you very much, my husband has taken on this stage with bells and whistles. He has been over the young movies for a while and now he loves going through his roster of favourite movies in this genre and re-watching them with our boys.

Why teens should see this movie

With all the Marvel movies out there that tweens and teens have seen, as well as series binging that are well beyond what I would consider for my type of entertainment, if your older child enjoys them, this movie is an absolute must. And I stress this next point: this film is for both male and female older children. Young women will feel a true sense of empowerment to see a female army leading and succeeding with their wit and strength. I cannot give anything away but let me tell you, there were two moments that the audience cheered and applauded the directive decisions in the young warrior’s life that she made. This movie did not take the easy way out with typical decisions that women seem to make when faced with difficulty in movies. That alone makes it worth watching with your older daughters.

As for our sons…This movie is not what young adult boys see in the movie theatre with their buddies. Any war movies they have seen (I’m assuming here) have never had an army of strong female, Black women. To watch this film with my boys would give me immense pride as a mother and as a woman. It is rare to find a film in the genre they like, showcasing female power and greatness.

I truly hope The Woman King blows the box office numbers out of the water, and I hope the movie is nominated for a slew of Oscars. If this genre of film is something you are drawn to, I encourage you to see this film with your friends or/and your older children (teenagers).

Post note: For this movie review, I have not written the full list of cast and crew of The Woman King. You can (and I know you will and totally should) look this up for yourself. Each actor was beyond incredible and I was in awe of them.

Five Really Fun Activities to Close Out the Summer