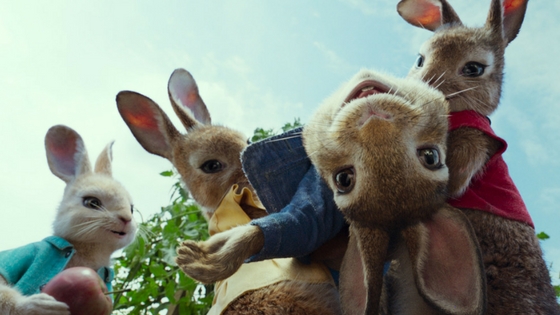 As a child, I had some classic books in the home that my mother read to me and then I continued reading as I got a little older. One such series of sweet stories was from the Beatrix Potter books about Peter Rabbit and his friends. It has been beautiful to continue the tradition and read the stories to my boys since they are timeless.

The Tale of Peter Rabbit was first published in 1902 so you can imagine the writing is of a certain style, not used any more in conversation. Initially, when I heard that the movie was going to be released, I was unsure it would do justice to the beloved children’s books, and honour the sweet stories that Potter had written and illustrated over one hundred years ago.

But thanks to a delightful screenplay by Rob Lieber and Will Gluck (who also directed the movie), as well as the actors, they made sure to make the movie celebrate the stories we have grown up with and create a modern and tasteful addition as a movie that is full of delight.

Here is the official trailer:

This movie is a fantastic family-friendly movie and it entertains the children as much as the adults. I loved it and so did my boys. What I found incredible, and I suppose because I have grown up with all the changes to technology and graphics, was the animation quality of these little bunnies! All the animals were so realistic! Each animal’s fur was different, and their motions with wind and speed changed the fur as if you were watching real animals on screen. I couldn’t get over the scenes with actors “holding” animals or interacting with them. I remember back in the day when the animations were so obviously added that you just went along with it and enjoyed the show. This movie had me second guessing myself and what I was watching.

The animations of Peter Rabbit and his family were so vividly similar to the illustrations of Beatrix Potter, that it was so special to see her hundred-year old characters come to life on screen. And although the language style was modern and quirky, the message was still the same; the love of family and friends is important.

Is it OK for little ones?

There were no scary parts or inappropriate scenes, making this a surefire win for families with young children. Just a few spoilers to mention if you are concerned for your little ones; mean old Mr. McGregor dies (in a funny way, not scary), and the use of explosives are in the movie to blow up the animals’ homes and get them out of the garden. No animals were hurt, although in one scene you think they are, but all is ok. There is also mention of the parents of Peter Rabbit and what happened to them. If you know this ahead of time, you can prep your little ones to know no animals get hurt.

The cast of actors consisted of just a handful, with Domhnall Gleeson and Rose Byrne as the main actors carrying the movie. I’m a big fan of Domhnall Gleeson after seeing him in Goodbye Christopher Robin (and yes, Star Wars), and it was fun to see him in a less serious and more comedic role. James Corban is the voice of Peter Rabbit and it is such a great fit. I loved the whole movie and would be happy to see it again.

Have you seen Peter Rabbit? Did you like it as much as we did? I’d love to know your thoughts below.

Disclosure: We were invited to the pre-screening of Peter Rabbit to facilitate this review. All opinions are honest and my own.