Close Up of Alice Through The Looking Glass Costumes {plus review} 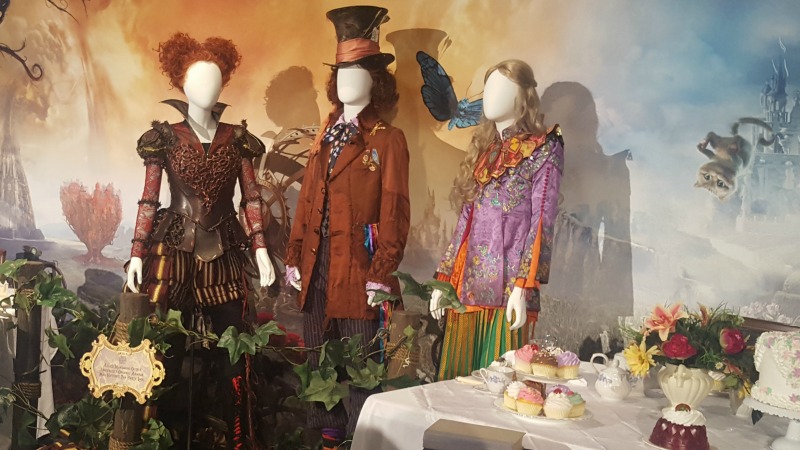 Friends have been asking me what some of the exclusive things I got to see and do at Walt Disney World during the Social Media Moms Celebration were. One was learning about the new film, Alice Through the Looking Glass. Not only did we get to hear details about the making of the movie from Executive Producer, Suzanne Todd, but we also go to see a 3D pre-screening of the film at Disney Springs! What an experience to have an exclusive screening just for us. At the time, it was so hush hush, that we were requested to shut down all our devices and not share just yet.

Today, Alice Through the Looking Glass hits theatres so you can go and discover it for yourself (which you should!). What you won’t be able to see is the amazing detail in the costumes, so I thought I would share that with you. Look closely at Alice’s costume and you will see Rabbit embroidered in it!

–  The late Alan Rickman gave his final voice appearance in this film for his character, Absolem. It’s chilling when you hear it, and his role is bitter sweet; the caterpillar has now turned into a blue Monarch butterfly.

–  As I mentioned, many backgrounds and sets were made graphically and the actors had to act with a blue screen. Why blue? The traditional green screen was used first and caused headaches for many, so the solution was to change it to blue. It worked.

–  Mia Wasikowska who plays Alice, had many a tumble in her stunts for the film. Look for the scene where Alice holds tight and falls down a giant rope. In the movie it looks perfectly graceful. In reality, poor Mia had to do a ton of takes and got seriously dizzy and sore!

Do not expect an extension of the same story from the 2010 film. Although the same cast of characters is back, the story is brand new. And when I say brand new, it really is – this was not a direct adaptation from the Lewis Carroll’s books. It was Linda Woolverton (“Beauty and the Beast” and “Lion King”) that created this magical screenplay in 2012 and all involved were thrilled to see a new chapter in the Alice stories, still staying true to Carroll’s tone. Without giving too much away (and if you’ve watched a trailer by now, you will know this), Alice has been gone for three years travelling the world, but now her best friend, Hatter, is in trouble, so she returns to Underland. The new character and subject focused in this story is Time. And when time as a subject is at play, expect wonderful back stories. For example, why does the Queen of Hearts say “off with your head!”? You’ll find out the origin.

Yes! I have to admit, I was reluctant to take my twins to the pre-screening. In fact, I ended up going alone to see it while my boys stayed back with my husband to have a swim. In the end, I think they would have enjoyed it very much, however they had not seen the 2010 film yet. Now that I know it is appropriate for their age, our plan is to rent the first film and then make a family date out of it and see the new movie in theatre this weekend!

Keep in mind this is a high intensity film. While it is a visual feast for the eyes, it is also fast paced and loud at times. Also, the storyline of saving the Mad Hatter in time becomes very heated. Some children might become very emotional at this. There is also a scene with a big, fire breathing flying dragon. My suggestion is to see this with school age children (about 7 years old and up). But as always, you know your children the best. Luckily we have the first film to use as a gauge. If your children loved the first film, they will love seeing their favourite characters again on the big screen.

All in all, I really enjoyed the movie for its detail, cinematic splendor and the emotional story about time. All of this combined with a main character that is strong, thoughtful, a true friend, powerful and a woman, make this a must-see movie.

Disclosure: I was invited with my family to the exclusive Disney Social Media Moms Celebration. As such, I was provided with various discounts and products. I was not requested to write this post, but I am more than happy to share my new-found Disney knowledge with my readers. All opinions are honest and my own.

Join Me in #TheGivingEffect , A TELUS Initiative

Mama Gifting Made Easy with Hallmark {with...