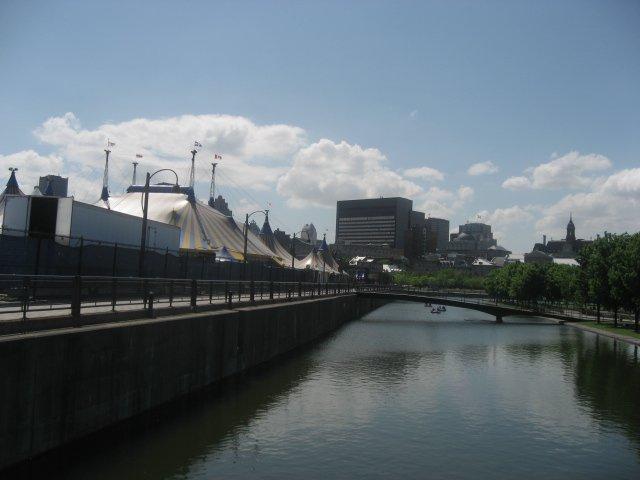 My husband and I approach the gate and smile as we take in the site of the blue and yellow big top. We are about to see the new performance, Amaluna, by Cirque du Soleil. I was invited to attend as a blogger so I meet and greet the press team and then I am given my tickets for the show.

Tonight is one of a few performances devoted to the press and big leagues of Montreal, premiering Amaluna. Former Prime Minister Jean Chretien arrives on the red carpet and takes pictures with the cast before being asked a question or two. Other important Montreal names are rubbing shoulders and my husband is like a kid in a candy shop, letting me know just who is around us. Yes, tonight we feel like very important people!

We take our seats; I look around and breathe it in. I am honored that we were invited for this full house performance. The tent, as always, has been transformed into a new world with a fantastic setting. The scenery is further transformed with lighting and music that has begun. Performers are already in character as guests take their seats, getting us into the mood of what is to come.

And then it happens, the lights dim and the Amaluna clown takes center stage:  “Mesdames et Mesdames, Ladies and Ladies, welcome to Amaluna!”

A bold move to welcome only the women of the audience, and here is the reason: Amaluna is the first Cirque du Soleil performance created with the majority being female performers. In a cast of 50 artists from 15 different countries, the cast is 70% female and the band is 100% female. As well, Amaluna is directed by renowned New York director, Diane Paulus.

With our press release in hand, I read on. The name “Amaluna” is a combination of the word ‘ama’ meaning ‘mother’ in many languages, and ‘luna’, which means ‘moon’.  In the show, Amaluna is the island governed by goddesses where the story is told.  The goddesses are guided by the cycles of the moon and the story centers around the coming-of-age ceremony for queen, Prospera’s daughter, Miranda. After a storm has shipwrecked men on the island, Miranda falls in love with young Romeo. The two characters face problems throughout the show that eventually lead to a harmonious ending.

My husband and I enjoy every moment of the performance. When intermission begins, everyone’s phones come out. Remember, this is a press performance! So I do what any blogger would do, I start to tweet! I tweet about where I am, I tweet about the scenery, the cast, the performances and the people attending. And then something amazing happens. I get a response from…a performer! It turns out, Lara Jacobs, the Balancing Goddess, is backstage during intermission, tweeting out to her fans and friends. We have a quick back and forth as intermission is about to end. I wish her good luck and she tweets she’s up next. If I wasn’t excited before, now I am spinning! Not long after intermission, Lara takes the stage, alone with a pile of sticks. That’s it. And so, we watch with wonder.

With little of no music at times, Lara slowly and intricately creates a massive mobile with the different sized sticks and balances them with her hand. She uses her feet to pick up more pieces and while she is creating this mobile, the crowd is frozen. You could hear a pin drop, the suspense is so intense.  Once the performance is complete, the crowd jumps to their feet with cheers! Lara Jacobs receives the only standing ovation of the night. And we are now following each other on Twitter!

Amaluna has all of the wonderful things that are associated with a Cirque du Soleil performance: humour, suspense, passion, intrigue and amazing music. In comparison to other Cirque performances, aside from the noted female majority, the music is rougher. There are the usual ballads, but the overall feeling in the music is hard rock. As well, as a mama, I would say the storyline is a PG-13 rated show. The story itself combined with certain performances would lead me to bring older children to Amuluna. This is something to keep in mind when purchasing your tickets. Personally, I think this is a fantastic date night event!

I was lucky enough to keep in touch with Lara and had the great opportunity to meet her one day before a show. Publicist, Amelie Hamel showed me around backstage – it was a dream come true! I learned so much about Cirque du Soleil and was truly honored to have been given that opportunity!

The location of the Cirque Du Soleil tents are at the Old Port of Montreal. It takes about 10 minutes to walk around the grounds which include the kitchen, cafeteria, offices, schoolhouse, costume, hair and makeup stations, laundry room and backstage warm up areas. Each big top is created the same in every location around the world.

After catching a couple of performers practicing their routines, I am introduced, in real life, to Lara Jacobs, Balancing Goddess! 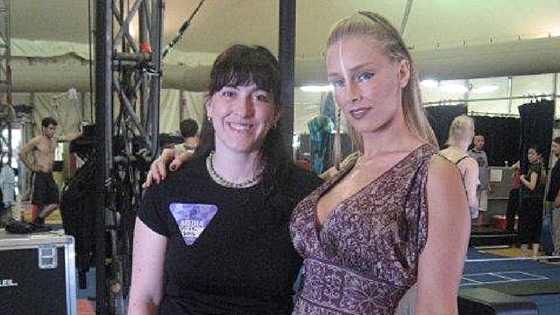 Lara was born in Switzerland and started performing in the circus at five years old. Her parents were circus performers and now own their own circus called Rigolo Swiss Nouveau Cirque. At sixteen, Lara moved to New York City and fell in love with it. She continued performing and studied a variety of methods such as ballet and modern dance, trapeze, and the unicycle. In fact she used to ride her unicycle to school! 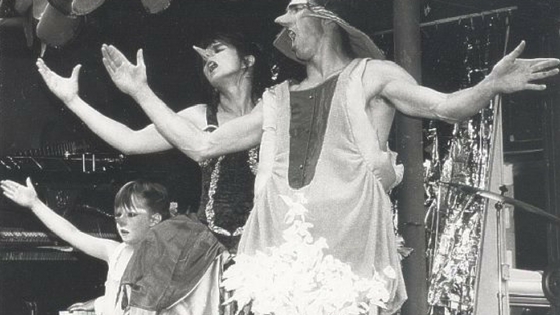 Lara got married and had a baby when she was young but never left the circus. I asked her how she did it.
“I performed in a dance company in a mother role until I was eight months pregnant. After my son was born, I started working out immediately. I was 20 years old and did not listen to the doctors’ advice to not work out yet. After three weeks I started training again, it was hard because I had gained like 50 pounds (from the pregnancy), no kidding, but lost it all in three months. I really suggest exercise during pregnancy, it kept me in shape and I was less tired after as well as less back pain. There is pilates or yoga for pregnant women which is great. And after I seriously did 500 sit ups every day, ate a healthy breakfast and lunch and just soup for dinner. That was hard but I felt good about myself in a short time. I started touring after 8 months again!” And if that isn’t impressive enough, Lara nursed her son in between performances! That’s a dedicated mama! 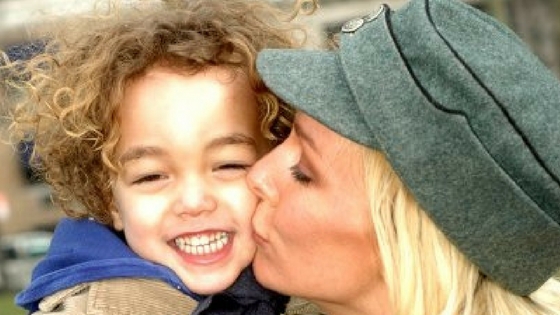 So how did the whole Balance Goddess come about with Cirque du Soleil? It turns out, the performance Lara does in Amaluna has been around for about 17 years. It was her father, Maedir Eugster, that invented the performance. On a family vacation in Sardinia, Italy, Lara remembers her father collecting palm branches on the shore and playing with the different sizes and weights. Soon after that, Maedir was performing the act. It became so popular that it got picked up by others. Eventually, Cirque de Soleil reached out and said they wanted Maedir to come and perform the act. But because Lara’s family was running their own company, it was impossible. So her father suggested her to go and try out for the performance. Lara came for an audition with other hopefuls without mentioning her connection. She had never performed her father’s act herself but she says perhaps her closeness to it and that she saw it performed so many times, helped her get the position! 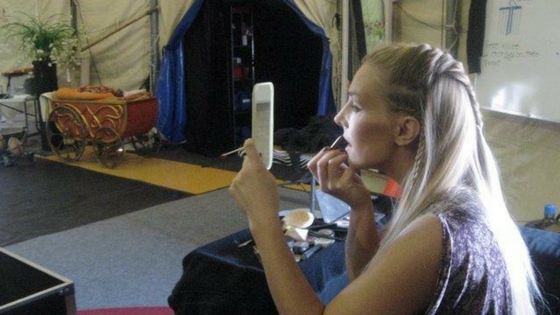 An extraordinary story for an extraordinary performance. I highly recommend seeing Amaluna while you have the chance. There’s nothing like seeing a Cirque du Soleil show and Amaluna is yet another hit. One last question I had for Lara: When and why did you start reaching out to fans via Twitter? “I saw some people writing about Amaluna so I just answered them. We never see our audience and never get feedback, so it’s nice to hear what people think of the show.”

So there you have it. Twitter is playing a great part in both our lives – Lara gets all the great feedback from her fans and I got backstage at Cirque du Soleil! That’s social media for you.

So tell me, have you seen a Cirque du Soleil performance? Which one? I’d love to read your comments below.

Sunny Shopping Takes the Guesswork Out

What Would Anna Do?

Dreaming of the Beach – Thomas Cook...

Mickey: The Story of a Mouse Review...

Let’s Do Lunch {#BackToSchool with Target}

The last Cirque performance I went to was Ovo I believe it was called? This one sounds amazing and Lara sounds like such a wonderful lady! I would love to see it! Do you know if they’re coming to Toronto? I am completely going to miss Cirque when I move to England. Do they go there at all?! 🙁

Yes, they play at the Albert Hall most Januaries

Amazing! I would LOVE to see it one day! You lucky girl!!

I’ve been to one Cirque du Soleil show and it was soooo awesome!!! We bought the DVD. Love to see this show too:)

A couple of years ago we were invited to see QUIDAM as a family – what an amazing afternoon we had! Would love to go and see another show of Cirque du Soleil! Katrin

wow, this must be simply amazing!