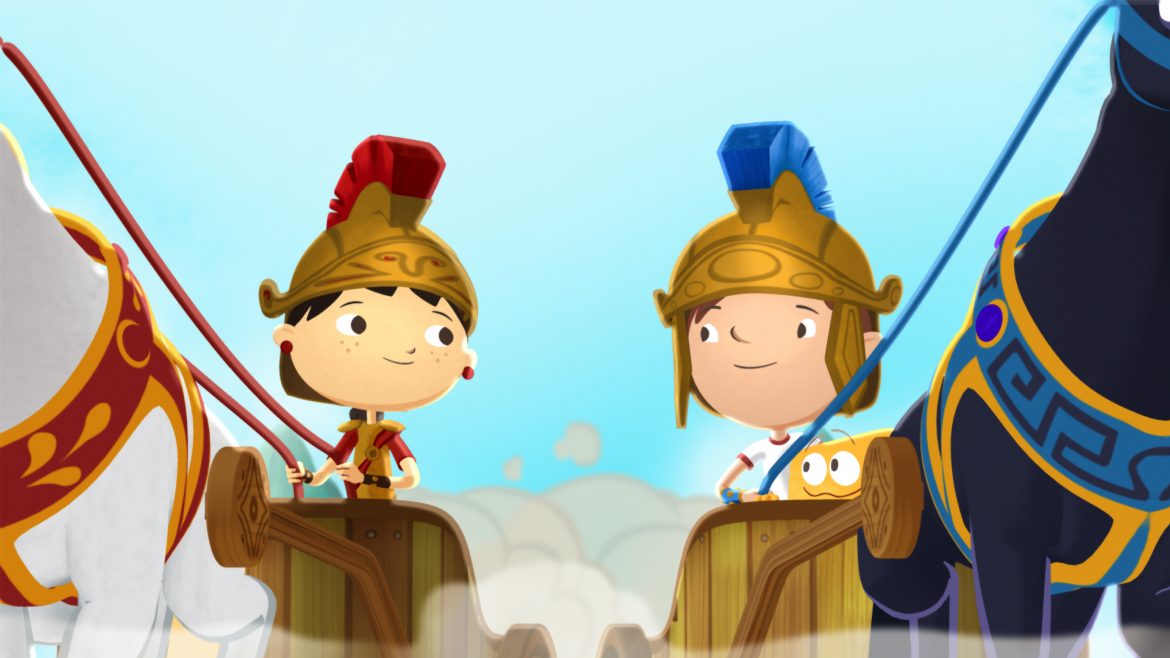 There is a great new Canadian original series for preschoolers on Disney Junior called Justin Time!

My children and I were given the opportunity to see the show before its premiere and oh boy, was it a hit! As you may recall from previous posts, my children watch very mild shows for their age and we like to find things with an educational aspect. Justin Time fits the bill! Not only were they interested, they were hooked! Not too fast paced, but very exciting and very educational. This show gets a Mama MOE thumbs up.

Justin Time is about a boy named Justin, and his sidekick imaginary friend named Squidgy. The show starts off with Justin facing a problem. He and Squidgy think up ways to solve the problem and use their imagination to visit different places, with the help of their friend, Olive. Olive is always waiting for them, to guide them through their latest destination. Best part? The destinations are real places in the world. The first episode we watched brought Justin to the Coliseum in Rome, another brought him to the Galapagos Island. We even pulled out our tour guide books after the show and looked at these real places in the world. That really interested the kids too – to see just what these places are like ‘in real life’. When I told them Mama and Papa MOE have been to the Coliseum in Rome, their eyes lit up! And of course the next question was “can we go there one day?”, that I loved. Not only were the episodes engaging, they were educational in a fun way. And the level of information was perfect for their age.

The stories used real life situations that need to be solved. For example, in the episode with Rome’s Coliseum, Justin had left his bike out in the rain and it got rusted. He didn’t know how to fix it so he could ride it again. Well, after his adventure with Olive, riding chariots in the Coliseum, he found the solution to his problem. The chariots needed oil on the wheels to help ride well after they were left in the rain. Once Justin is back at home and out of his imagination, he oils his bicycle wheels and his real problem is solved.

The episode I liked best to help my little ones was that of the Galapagos Island. Justin was collecting bugs in jars and couldn’t tell if his new pets were happy. Into the Galapagos Island he is brought where he meets a flamingo, an iguana and a tortoise. When he sees how happy they are in their environment, he decides not to take them back with him and take pictures of them instead. So back at home, Justin sets his bug friends free and takes pictures to remember them. Of course I will be reminding my kids of this episode on an almost daily basis since they LOVE collecting bugs!! Any bit of help is great for us mamas, right?

Justin Time premieres this week and can be seen on the Disney Channel on Sunday mornings at 8:30am. Set your PVR for this one – these episodes are worth watching over and over again!

And don’t forget to visit www.DisneyJunior.ca to print out some colouring pages of Justin, Olive and Squidgy!

Disclosure: I was sent a preview copy of Justin Time to review. All written opinions are my own.

Do Yourself A Favour And…

Ice Age On Ice is Coming to...

Great Suggestions For My Giveaway Winner