Why I Was Really Holding On To My Children’s Artwork 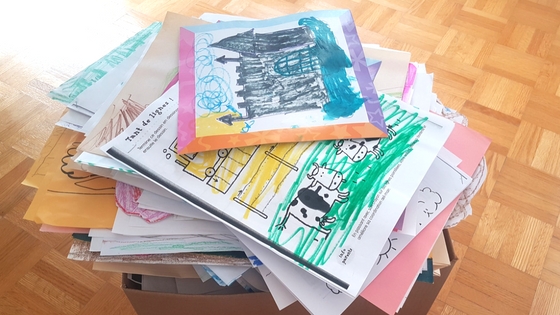 I’ve been a little quiet on the blog and on social lately. I’m doing a major decluttering of my home. While that doesn’t seem like a good reason to not be working over here, I can tell you it is. I am still in charge of three little people and the cooking and cleaning, etc. So here’s a glimpse into what has been going on while they are not home!

It was as if time had stood still.

I’ve been making a lot of jokes over the last while about clutter and my children’s artwork. I always kept it all. ALL. There was no way I could throw away something they worked hard on. Well, worked on. I mean, they drew that! They painted that! They created something from nothing. Their little minds made something up. And then I also kept every little paper they worked on at school. How to add, subtract, how to draw a straight line, how to colour in the lines, how to write in cursive…

But as any parent knows, the multitude of papers they bring home from exercises at school is enormous.  And as they grew up a little more and school exercises were mostly homework and less colorful art, I felt a ping in my heart. All that I had in my bins were all that I would maybe ever have….

If you ever watch hoarders (come on, I know you have at least once) you know that all hoarding comes from a direct moment. Whether it was an illness or a death, there is always something that triggers the hoard. I always felt for them, all the people who couldn’t get a handle on things. Things! But I never understood them in the least. Until I looked at what I had kept and why.

As I was rummaging through my children’s artwork I realized why I hadn’t been able to touch anything. And when I say touch, I can tell you my husband and I have had arguments about it. He would want to get rid of art and I would argue as to why I couldn’t, and that I would, soon.

So here I was, in the juice of the real mess that had become their artwork, and I came across this: 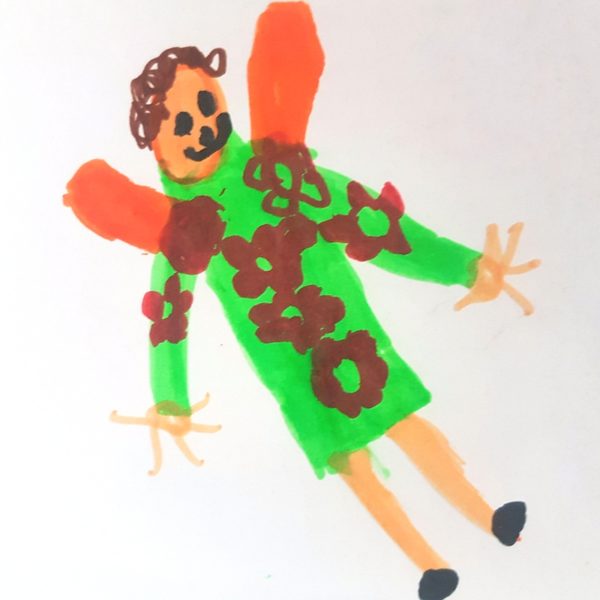 This was a drawing my oldest son made shortly after my mother passed away. This is her, in her flower-filled hospital gown. Because at the time, he imagined his grandma was going to heaven in what she had been wearing when he saw her last.

And then I sat still and thought, this is why. My oldest had been in kindergarten when It happened. And my whole world fell apart. My father had died years before that but this was different. I had my three babies, and they were growing, and I needed to be a mama, not a daughter mourning.

It was my way of holding on a little longer. And it makes no sense, and it sounds a bit ridiculous. But that is what it was.

So here I am, years later, decluttering and realizing this is not easy for many, many people. If you are doing this, if you are trying to get out of your clutter, I feel you. No matter kind of clutter it is, and no matter what your situation was or is, I understand a little more now.

It took me time to get here, and see my children’s artwork for what it was in my heart. Of course, I am keeping a lot of it still, because it makes me happy! But, those math exercises, and copies of homework are off to the recycling bin.

I’m preserving some art in easy-to-get to-file folders and taking pictures of the things that can’t fit in them. I have a long way to go, and I will declutter more of it with time, but this is a good start. I have a lot to share about this experience, and I have had help from an amazing person. I’ve also learned a lot along the way and I can’t wait to share that with you. It will deserve its own post.

For now, I just wanted to share this with you, mama. Don’t get discouraged about your clutter a.k.a. their artwork if you’ve got those bins. It’ll get better.

MOE on the Radio

How Encircled Can Help You Dress With...

The Best #LifeAdvice I Am Receiving

Oh this made me teary! I’m glad you’re working through it though, hugs mama.

Thank you, Heather. Didn’t mean to make you teary!

One thing I have noticed about certain sites is that, even though they have tons of content, the site looks great and the headlines are eye catching is that the material is simply filler. It’s downright unreadable. You can forget it 6 seconds after you read it. Not the case with your post though, really enjoyed it reading it and it held my attention all the way through!

Well, thank you very much! I appreciate you taking the time to read it.