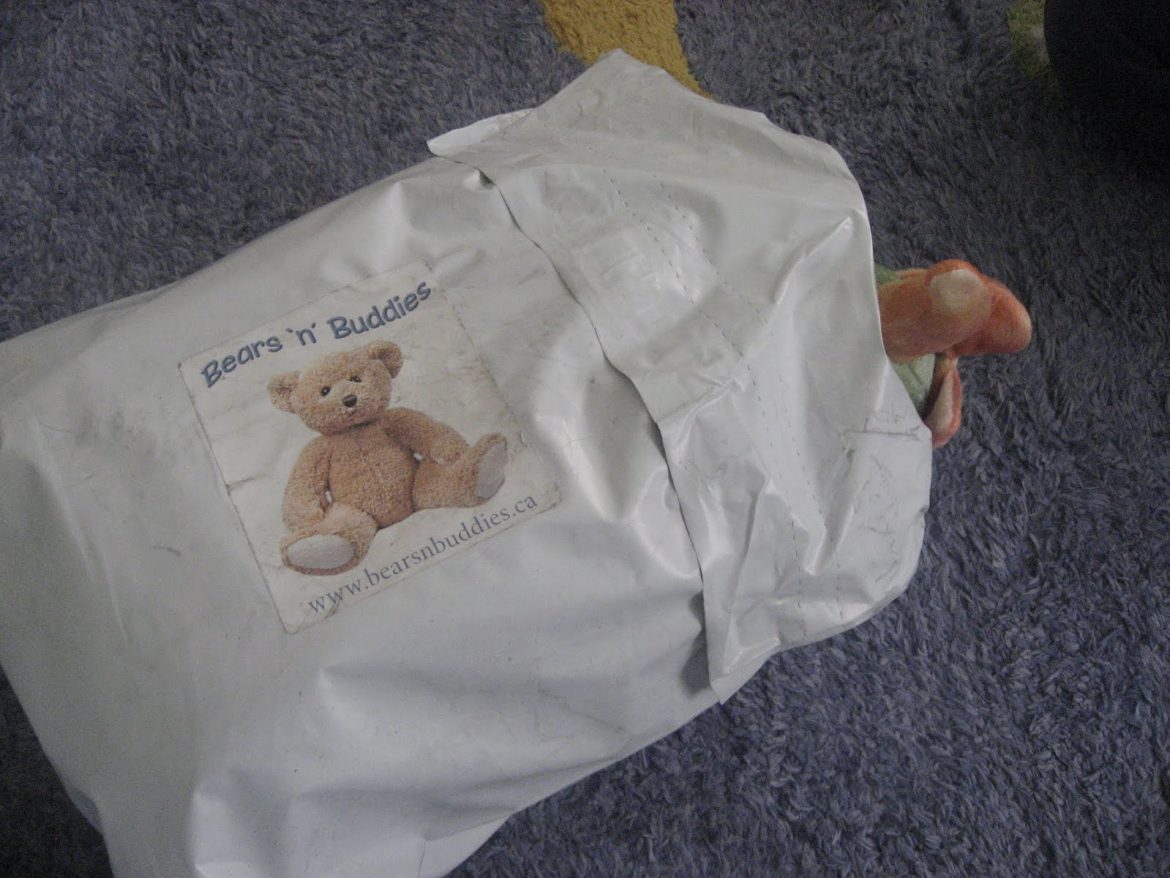 As most of you may be aware, I have reached a big milestone recently: I now have over 1000 followers on Twitter! I am so thrilled about this milestone and even more thrilled that I am able to offer you, my fabulous blog readers and tweeps, a great giveaway!

I discovered Ontario based Bears ‘n’ Buddies while attending the She’s Connected Conference in Toronto this fall. Work-at-home mama, Deborah Schwab, created Bears ‘n’ Buddies Canada six years ago. The concept is simple, your child can choose an animal, fill it up with stuffing and the toy is “made” by them with no sewing required! I know most of you are well aware of other brands similar to this in big shopping malls. I myself have used those in the past because I think they make fabulous presents. So, with that experience already in my mind, I set out to review a Bears ‘n’ Buddies animal.

The first fantastic thing worth mentioning is that I did not have to leave the house to do this great project with my child. I have three children, so going to the shopping mall is already an ordeal. Inevitably, whatever I came for to the mall is never taken care of completely, and the children have a good time because it ends up being all about them. Adding a toy making excursion to that mix guarantees a later time home and possibly a meltdown from at least one of the three. We are not mall folk.

With Bears ‘n’ Buddies, I decided online what doll to make with my oldest child, alone, without other distractions, or too many choices in our faces. Once we chose his favourite, we logged off and waited for the parcel to arrive. When it did, he was ecstatic! You should have seen the look on his face when I told him his friend arrived in the mail and he was able to open it up and start making him. 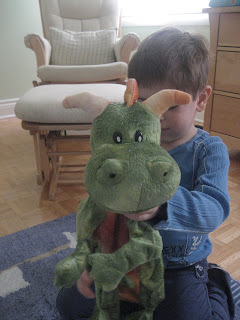 The twins were witness to the project and even helped without too much argument. After all, there was clearly one animal for their big brother, and they were allowed to help. That would be so much harder in the shopping mall, for so many reasons.

Another big difference was the time I had to complete the animal with my son. At the shopping mall, the experience may be fun and exciting, but the time allotted to each child, especially if it’s a busy day, is slim. Getting a young child to focus on all the steps to create the animal is hard when the clock seems to be ticking in their ears. At home, we casually sat down, opened up everything and got to work. It was much more relaxing and way more intimate. And that was the best part of this experience for me. 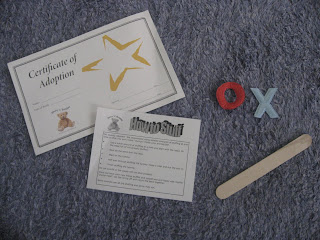 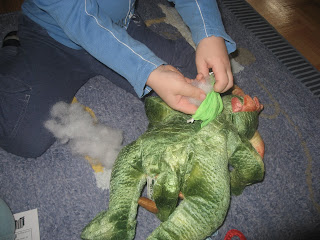 The instructions were very simple and clear. The stuffing was placed inside the doll, and a flat stick was given to push the stuffing into the arms and legs (and in our case, tail) of the animal. Our animal came with its face already stuffed, which I kind of liked, because the face can be a place where the stuffing should be tight and just so, otherwise you might end up with a lopsided head. His dragon was already smiling at him when he took it out of the packaging, so he was happy to get the rest of him filled up.

The kit also came with a hug and a kiss to place inside the animal. We loved that! I coaxed my son to kiss the kiss and hug the hug and place them inside the dragon’s belly. It gave his animal even more meaning. My son was falling in love with this animal during each step. Once all the stuffing was in, all he had to do was pull a drawstring. 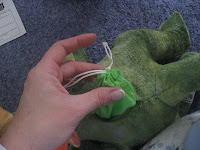 I made a knot, and we tucked it inside the doll. A Velcro was all that was needed to seal close the animal but there was one great feature to it. The Velcro was covered on one side with a small piece of material. Genius! It helped keep the stuffing from sticking onto the Velcro and when we were ready we just had to remove the material and seal it perfectly. In actual fact, I didn’t realize the material was there, and the back wasn’t closing well. My son was getting a little disappointed and I was also concerned this was not going to last. But when I found my own mistake, we sealed the dragon’s back and it hasn’t opened since!

Our dragon came with its own certificate of adoption. My son named his dragon Ben and signed his name as his guardian. It made it official and complete. I kid you not when I tell you that Ben has been my son’s companion since his creation. He takes his dragon with him everywhere! He even sleeps with him! As most of you mamas probably feel the same, stuffed animals are not something we are lacking in our home. I was sure my son was going to pile this one with all his others, but no! This doll is different; it’s my son’s creation. Definitely the best craft with amazing results!

A great bonus for mama: these creations can be washed in the washing machine! Just place the doll in a lingerie bag or pillow case on a coldwater wash, delicate cycle. When cycle is finished, lay to dry, then fluff up in the dryer.

I am so thrilled I was able to offer my son such a fabulous friend! And now, I am happy to let you know that Bears ‘n’ Buddies has offered to giveaway a reindeer buddy to one lucky reader!

In order to participate, simply comment on this post and let me know what your all time favourite stuffed animal was as a child.

This giveaway ends on December 12th, 2011 at 11:59pm. I will contact the winner by e-mail on December 13th. Please make sure your e-mail address is entered in the comments.

Good luck to everyone and thank you for helping me reach such a fantastic milestone! More to come!!

Congratulations to Precilla Ng! Better known as @PandaSweetSweet on Twitter, Precilla was the lucky winner!

Easter Sunday at the Vatican

So cute!
My favourite stuffed animal when I was a child was my Lambie and I still have her to this day. 🙂
I’d love to have my little girl win this fun prize! 🙂

Following your blog on GFC!

My favorite stuffed animal as a child was a Care Bear (I had the yellow one with a birthday cake on its tummy…Birthday Bear?).

My favorite was a teddy bear

My fav stuffed animal as a child was a toy dog!

The “Holiday Presents” are so mouth watering, my kids get to the table early to eat! lol

I have so many stuffed animals as a kid but my favorite was probably a small brown bear name Brownie who had a crooked nose from being squished by other toys. abailey_crace@yahoo.com