The build-up of Beauty and the Beast has been unbelievable. And you know what? It is completely valid!

The best of all performing worlds come together in this live-action adaptation. Broadway caliber productions, emotional close-up interludes, settings completely made to perfection, intricate detailed costumes, outstanding music (old and new), and actors that have managed to belt out tunes and create personal sentiments within the span of a couple of hours.

I had to privilege to see Beauty and the Beast at an advance screening with my bestie, Tanya of Montrealmom.com and I have had to keep my mouth shut ever since! Even before that, when we were at the Disney Social Media Moms Celebration, we saw eight glorious minutes and were not allowed to share a thing.

Like many remakes, an audience can strip it down and critique every aspect of something they already hold dear. And let’s face it, not all classics should be made new. Many remakes take new twists and turns. Alternatively, once the first trailer came out, some complained that it was too similar to the original. After all, the very kids that watched the classic animated story 25 years ago will be bringing their children to see this new version of the story they treasure. Having seen the movie, I can tell you, Beauty and the Beast has been respected as a story and made into a more in-depth tale you will hold in your heart with much affection, and so will your children.

Here is a video of the actors talking about being part of this experience:

So mamas, in an effort to be prepared for the movie, I have written down the things you need to know beforehand (again, no spoilers!):

You will cry. If you’re going with your children, prepare them in advance that mama is going to cry a lot! There’s no way around it, you will cry hard, so bring your tissue. Why? Because this movie will bring back your childhood memories of the romantic tale. I’ve said it before, and it’s undeniable, music evokes stored-up, special memories. This is what this movie will do to you, the moment you hear the very first instruments begin the very first song. 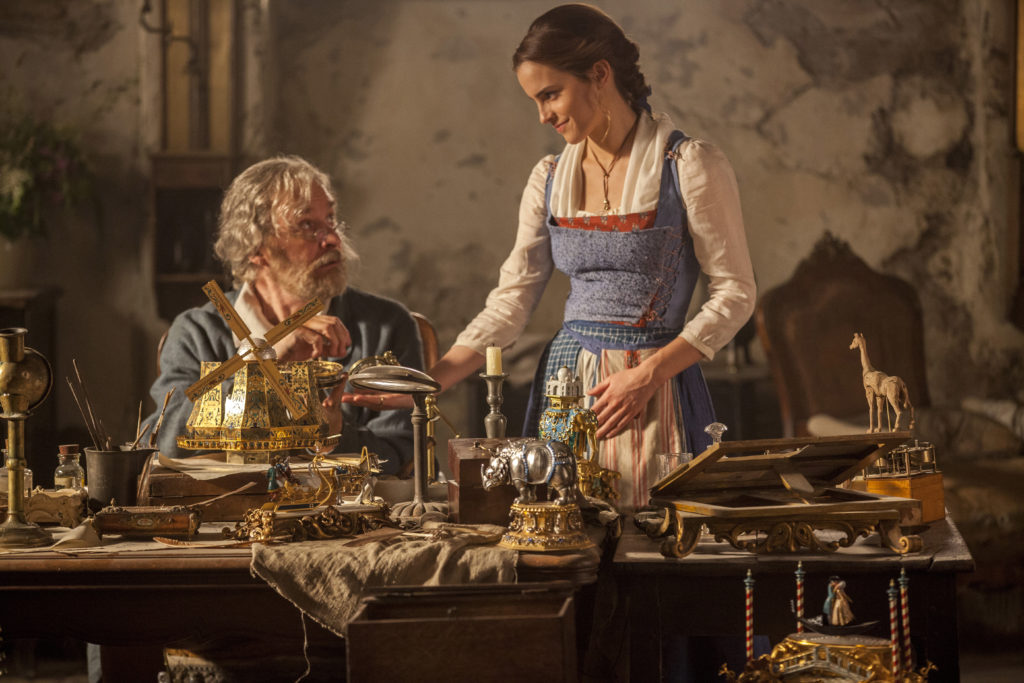 My favourite scene: Maurice, Belle’s father (played by Kevin Kline) sings a new song that I can’t stop singing: ‘How Does a Moment Last Forever’.

You will laugh! Of course, the classic animation was humorous as well, but this live-action production has some zingers that are brand new. Lefou (played by Josh Gad) is hilarious and Gaston (played by Luke Evans) is laughable in his arrogance. Even the Beast (played by Dan Stevens) himself has a joke or two. What I also appreciated was the jokes were perfect for all ages, as is the whole movie.

You will fall in love again. Your childhood memories of the classic will come back to the surface with newfound joy. Whether you were a die-hard Beauty and the Beast fanatic that watched it over and over again, or you only watched it a couple of times, it will all come back to you in a flood of emotions. The love story has been reborn in a new and everlasting story and you will love it.

You will be inspired. Like all Disney movies, for me, there is always a hint of inspiration that comes out either in a character or a song or in the movie as a whole. Beauty and the Beast will send you into inspirational overload! There is so much to admire, but mainly, and especially for children, Belle has come into her own, way more than in the animation. Belle (played by Emma Watson) shines with grace, dignity and fearlessness. This is by far the most glorious message in this movie for young girls and boys.

You will want to see it again! I was lucky enough to see an advance screening of Beauty and the Beast and I can’t wait to bring my boys and my husband again this weekend. We are ridiculously excited about it and if you follow my Instagram feed, you will see we have all gotten into the Beauty and the Beast spirit! Last week, we watched the animated version and in a spontaneous moment while the credits rolled and Celine Dion sang the Oscar winning song, my husband and I danced in the living room and our boys watched. See? Romantic and inspiring! 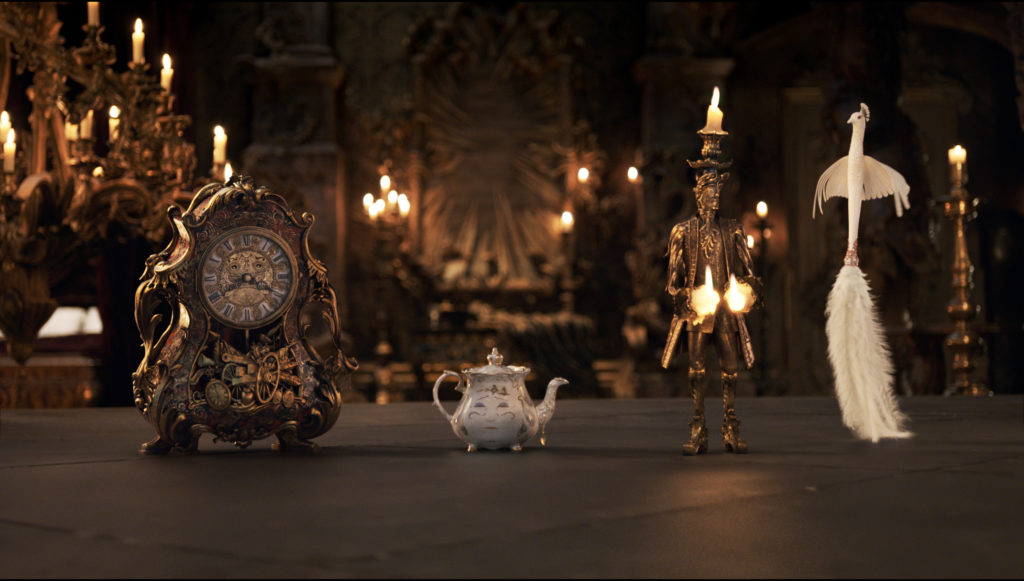 Is it for adults and children? Is it scary?

Beauty and the Beast does have a PG rating. This may be mainly because Gaston holds and uses a pistol. As I mentioned above, to prepare my boys for the live-action production, we watched the animated movie. They loved it and were immediately singing the songs thereafter.

The new version will not be scary if your children have seen the original. They will know what to expect – the wolves in the forest, the fight between Gaston and the Beast and the outcome of the characters. If your children are little, it may be worth preparing them once those scenes are about to happen. But if they know the animated version, they will be ready for it. As always, you know your child better than anyone. And a live-action production is way different that an animation. Everything, including the wolves, looks real. 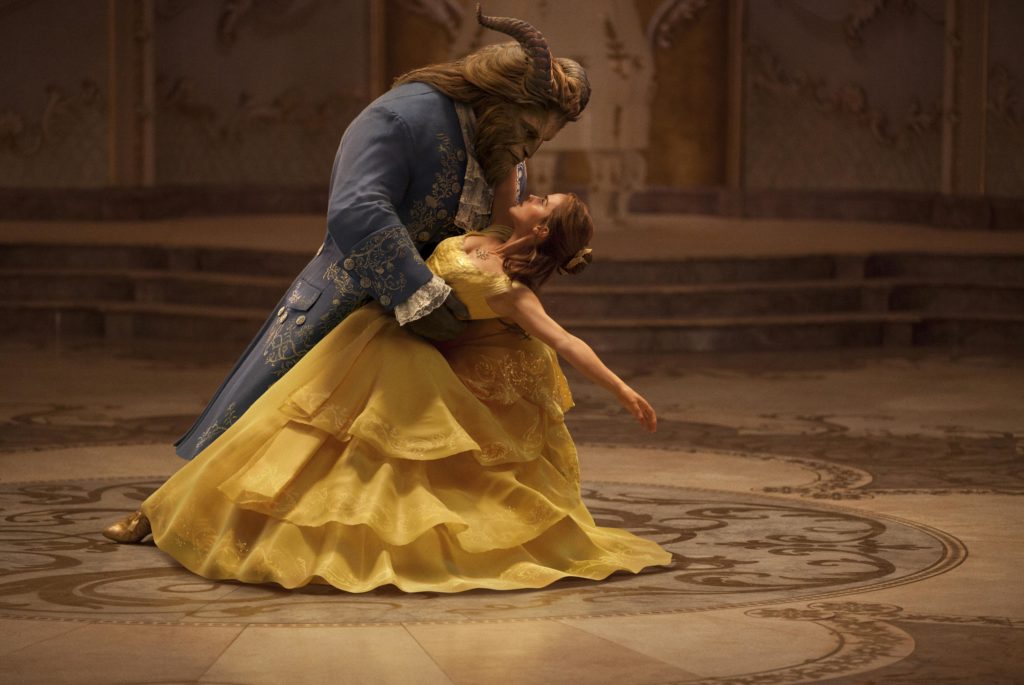 Emma Watson stars as Belle and Dan Stevens as the Beast in Disney’s BEAUTY AND THE BEAST, a live-action adaptation of the studio’s animated classic directed by Bill Condon.

Ultimately, Beauty and the Beast is a romantic story of befriending someone you wouldn’t normally, ignoring their appearances and learning who they are deep inside. What a wonderful message to be showcased on the big screen, for young and old.

There is SO much more I would love to write about this movie, but this post is running long. If you are interested in more, please let me know in the comment below.

I hope this review helps you and that you and your family enjoy the movie as much as I did!

Disclosure: I was invited with my family to the exclusive Disney Social Media Moms Conference. As such, I was provided with various discounts and products. I was not requested to write this post, but am more than happy to share my new-found Disney knowledge with my readers. All opinions are honest and my own. All photos and video copyright of Walt Disney Pictures.

How to Make an Easter Tree with...

Six Christmas Ornaments to Make with the...

Keeping Kids Busy On The Break

I can’t wait to see this move!

What the hell am I looking at and why do I like it? #adulting twitter.com/Y2SHAF/s…

I think tonight will be a #MontyPython movie night. #RIPTerryJones

This month is flying by. Do you feel the same?