Rodgers and Hammerstein’s Cinderella is Coming to Montreal! {giveaway} 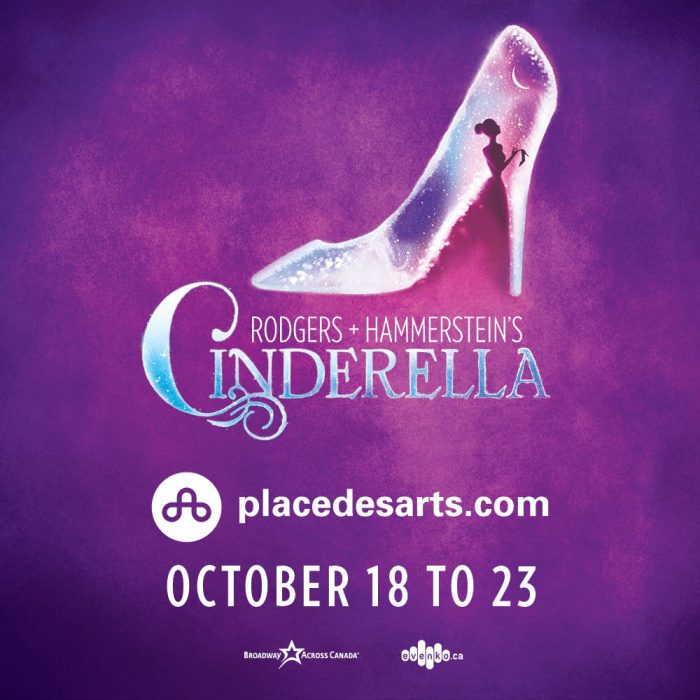 Ah, Cinderella. No matter how many times I read the story, watch a movie or see a quoted graphic, it always makes me happy. The last Cinderella movie created by Disney affected me so much – and the line that stayed with me was “Have courage and be kind”. I think, that is the most wonderful sentence for all young girls and boys.

Rodgers and Hammerstein created a version of Cinderella with a twist in the classic fair maiden character. For children, seeing this version, which includes the story from the book by Douglas Carter Beane, will give them new curiosities of what a princess (and prince) can be. The music, the choreography and the costumes will wow children young and old.

Rodgers and Hammerstein’s Cinderella debuted in 1957 for television, and it was the only musical ever created by them for television. The broadcast was viewed by over 100 million people (if your kids ask, that’s like going viral today).

In 2013, The Rodgers and Hammerstein musical debuted on Broadway and subsequently received nine Tony nominations and won a Tony Award for costume design. Now in 2016, we are lucky enough to have it come to Montreal for a limited engagement!

If you are Broadway fan, you know some classic songs from Cinderella include “Impossible; It’s Possible” and “In My Own Little Corner”. The same creators of South Pacific and The Sound of Music are responsible for the celebratory music in Cinderella.

I cannot wait to take the boys to see this musical. I know they will love it.

To learn more about the tour and when it is coming to a city near you (in US and Canada), visit their official website here.

To find tickets to the Montreal performance from October 18-23, visit the Evenko website.

For your chance to win a family four-pack of tickets to see Rodgers and Hammerstein’s Cinderella, simply comment below with your favourite character from any Cinderella story. I can tell you our favourite has always been “Gus Gus” the mouse!

This giveaway is for the premiere of Cinderella on Tuesday, October 18th at 7pm at Place des Arts in Montreal so be sure you can attend before you enter.

The giveaway will end at 11:59 PM on October 16th, 2016. The lucky winner will be notified by e-mail. Open to Canadian residents only. Remember to include your e-mail in all entries!

I’m Going to #TakeTheLeap With a Little...

Cinderella is our family’s favourite character from the story

Our favorite character is the Fairy Godmother because I am sure every girl has wished for one at least once in her life!

I love Gus Gus too!

Cinderella is a my favourite. ?