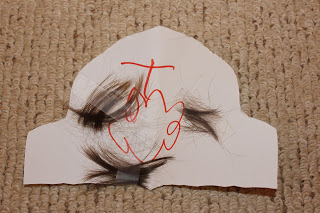 Sometimes you have to just laugh…or you will cry.

This Saturday when I left my home to run a quick errand, I had no idea that this was going to be waiting for me when I returned:

Before I was presented with the keepsake, my oldest (all of four and a half years old) said to me “Mommy, I cut everybody’s hair, and mine.”

It didn’t take long for me to see that each of my children was missing a substantial chunk out of their bangs.

I looked at my husband, who had been with them while I was out. He had a funny smile on his face. “Where did he get the scissors?!” I asked. “I don’t know” was his response.

So, dear readers, it seems a trip to the hairdresser is in order this week!

Thanks God the scissors he found were his blunt edge kids’ craft scissors in his crayons box. But to be honest, the way they are thinking these days, I wouldn’t put it past them to start climbing for things out of their reach. Just a friendly reminder that I must start locking more things up! My little one’s punishment was to not be allowed to have his scissors for a (long) while unless we are doing a craft together. Of course I explained, in detail, what could have happened had his siblings not sat still for their new do, and how he is only allowed to cut his paper for crafts…yada, yada. My husband giggling about it didn’t so much help…but it was pretty funny. The reason I can laugh about it is because no one got hurt…this time.

This is pretty much the first occasion that mischief of this calibre has happened. But I see it as a sign of things to come. I can tell the three are starting to join forces when they ‘play’ quietly together (never a good sign!).

When I told Grandma MOE, she said “I was wondering when that was going to happen” and she too…giggled.

So tell me, what is the craziest mischief your child has gotten into? I would love to hear from you!

Oh I can relate. When my daughter was about 18mt and my son three and a half, I left them alone in the basement for just moments. When i returned, i caught my son literally sweeping hair under the rug. He had cut his sister’s beautiful shoulder length curls down to almost nothing!
I was so angry then, but can laugh about it now, ten years later.
It’s only hair. Thank goodness it grows back.

Oh my! I should think it took some time to laugh about that much hair cut off!! But you’re right, hair does grow back 🙂

My best friend and I did the hairdresser thing when we were about 5 years old. Boy, did we get in trouble!

With my own guys, I think the worst mess we’ve walked in on was when one son had a #2 accident and tried to clean it up himself.

But he actually ended up smearing it all over the bathroom. And this was at a birthday party, hosted by people we barely knew. But they were cool about it, and now we can look back and laugh …

Yeah, sometimes it takes a while to look back and laugh!! Thanks for coming by and sharing your story!

Knock on wood my girls haven’t done this yet, I would be so mad! BUT, rather than doing it just to be naughty – it was a present. That’s actually really nice, a piece of each into one heartfelt gift…. ok, so I’m not in the moment and can’t get too mad at the idea {again, knock on wood}. lol

Oh Tammi, I hope your girls never do that! I guess it was a gift…a strange but thoughtful gift! Thanks for your comment and for passing by!

TO be honest I could not have been upset, I would have been laughing and remember he made you a very cute original keepsake from the heart.

"Remember, you don't have to wait for a greater life to be grateful. Be grateful and you'll have a greater life." - @jimkwik His newsletters are the best!

I mean, can we just hear the lunacy of it all? Thanks, @brittlestar you are 100% on this!! twitter.com/brittles…