Mind, Body and Soul – New Studio #AnjaliMudraYoga Has Got It All 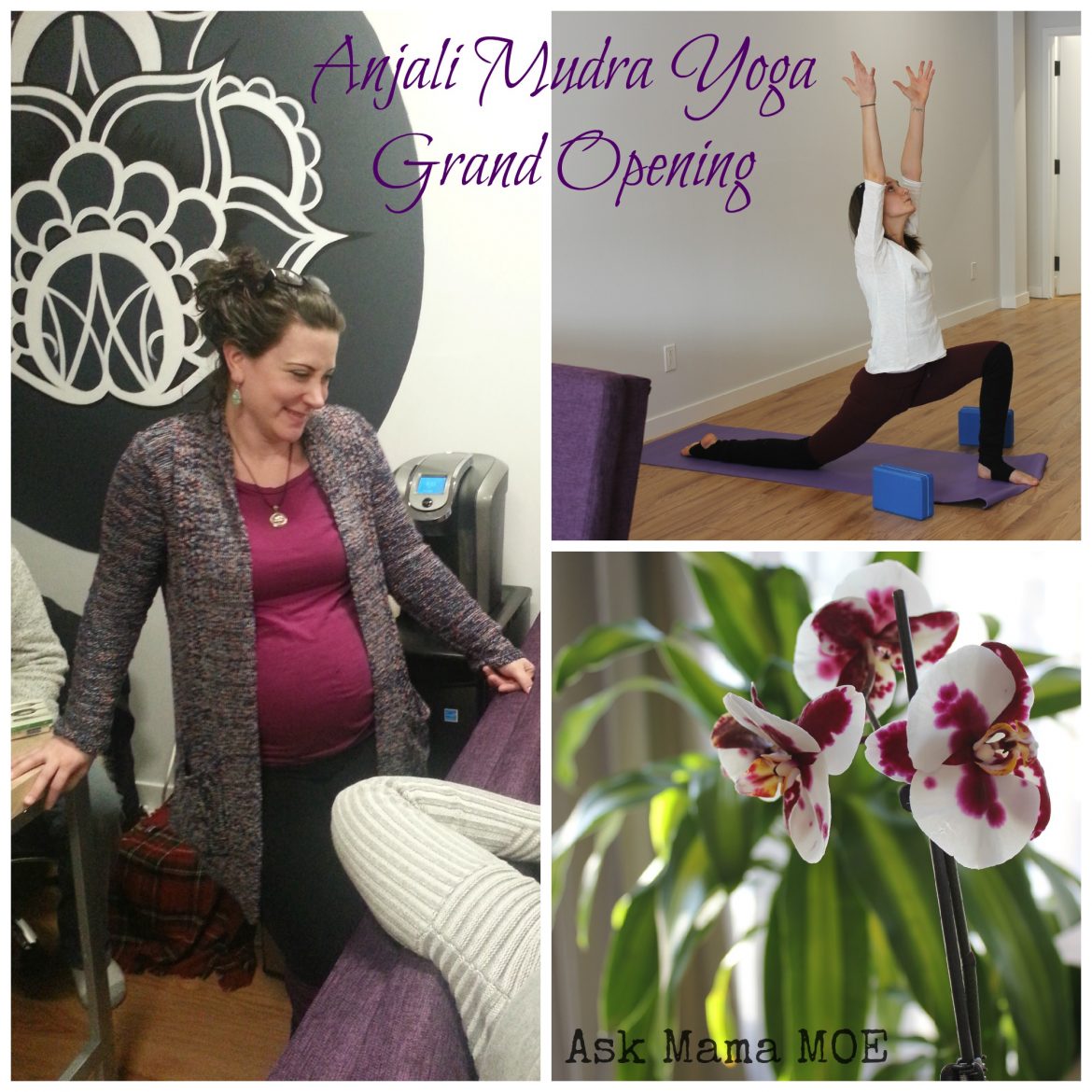 I’ve never been a yoga person. Or at least I thought I never was. It turns out I just wasn’t introduced to other styles of yoga, and some of them I have discovered I really like!

There are actually a bunch of different levels, styles, and accessories to use for yoga, and I got to try many of them at the grand opening of Anjali Mudra Yoga last week.

The founder just happens to be my amazing sister, Angela Chiarella. She has been studying yoga and meditation since she was just 18 years old and teaching for the past nine years. To write a list of her credentials would take up a full post so I will let you read it for yourself from her website. Personally, I saw her over the years, learning, developing, and growing as a yoga instructor. She has always had such passion for her field, which kept bringing her deeper into more studies well beyond the standard ‘yoga’ we hear about everywhere these days. She is the real deal and so is her studio.

She has managed to take all of her love for yoga and put it into the Anjali Mudra Yoga studio. The studio has been designed with a modern, Zen feel to it. Upon entering, there is a stunning wall art of the Anjali Mudra Yoga symbol, created uniquely by Angela and Montreal tattoo artist, Chris Allen of Inkproof. There is a cozy sitting area with two deep purple couches and a library of yoga and meditation books for your reading pleasure. Tea and filtered water are available, as well as a boutique filled with educational papers, gifts and books.

Some things offered in the boutique: 3 Pumpkin Designs jewelry, yoga-related books and documents, and ceramics by Porcelaine Weilbrenner et Lebeau

The studio itself holds a maximum of 15-20 students, depending on the space needed for the specific class. There are three changing rooms, a nice cubby area for your things and all the yoga materials you need for any given class.

There are seven instructors at the studio, and I managed to meet most of them at the opening. It was nice to get to know their backgrounds, and see that they, too, were just as passionate about yoga as my sister. All together, the team is a well balanced one, with great energy.

In the span of the day for the grand opening, there were mini classes going on every hour or so to introduce people to different classes. I joined in the restorative yoga class by Illaini and the Mantra, Mudra and Meditation class by Angela. Both classes were SO different compared to any other yoga class I had taken. I wasn’t contorting my body into positions I didn’t know, nor was I feeling like I was doing nothing. 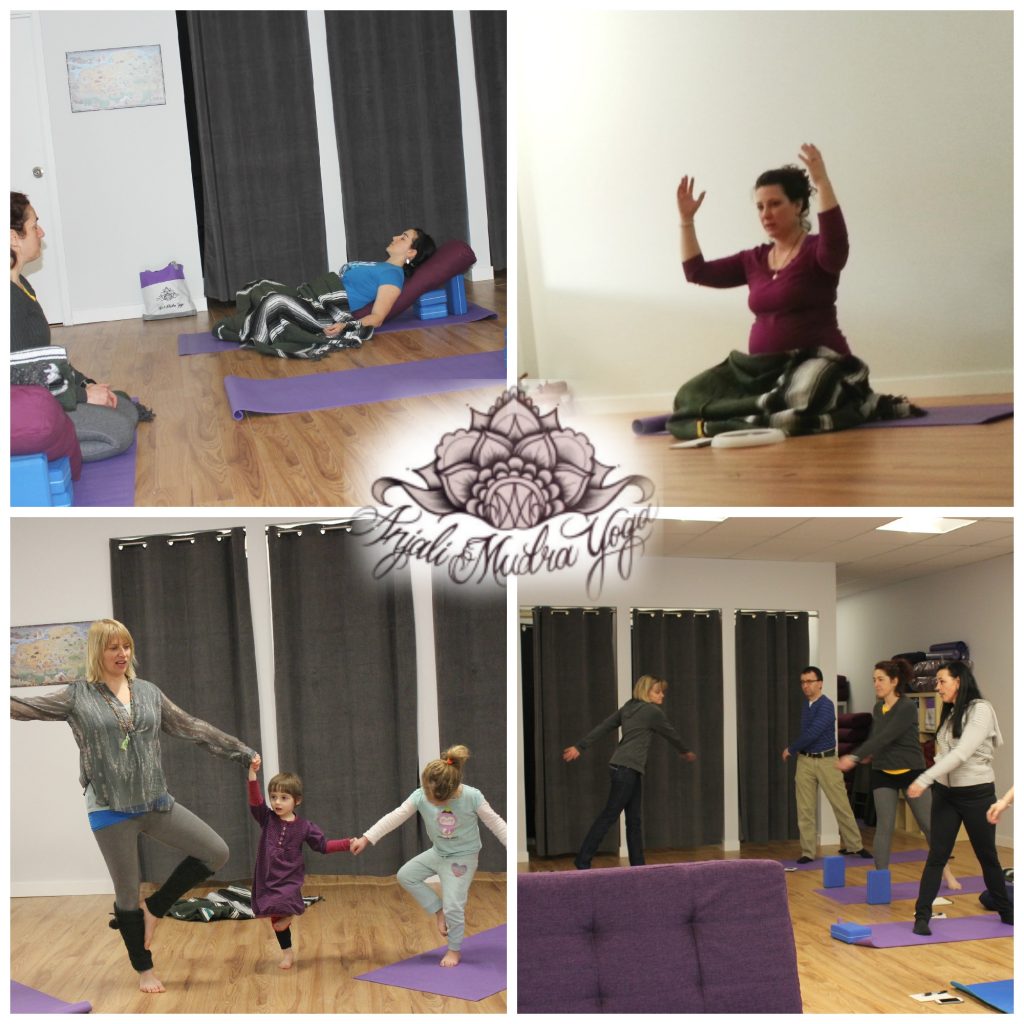 The restorative yoga class, when taken for the full 75 minutes is said to give you back energy. We used every prop for yoga that there was and we nestled into comfortable, restful positions to open our lungs and breath better, or to stretch in gentle positions. I had no idea this type of yoga existed! After I finished, I told Angela that and she said “Oh it is SO yoga”. Really? I thought. Well, that might be a class I will have to take!

The Mantra, Mudra and Meditation class was also very different. We used the cushions and sat in an upright position. We did four different mudras and all of them had different meanings and different goals. One mudra, said to help you release anxiety, required us to bend our arms with our hands up, and twist our hands from side to side for three minutes straight! It might not seem like much but it wasn’t so easy. After we did that, we placed our hands on our lungs and “brought the energy into our lungs” as Angela said. I’m not so open to this Zen way of thinking, but I can tell you there was definite energy passing; my hands were warm and I was focused on the moment. And focusing on the moment, free of other concerns, is a pretty good thing to do these days.

At the grand opening: delicious vegetarian wraps and crudités from Aux Vivres and a great selection of teas and coffee (Keurig 2.0 system) 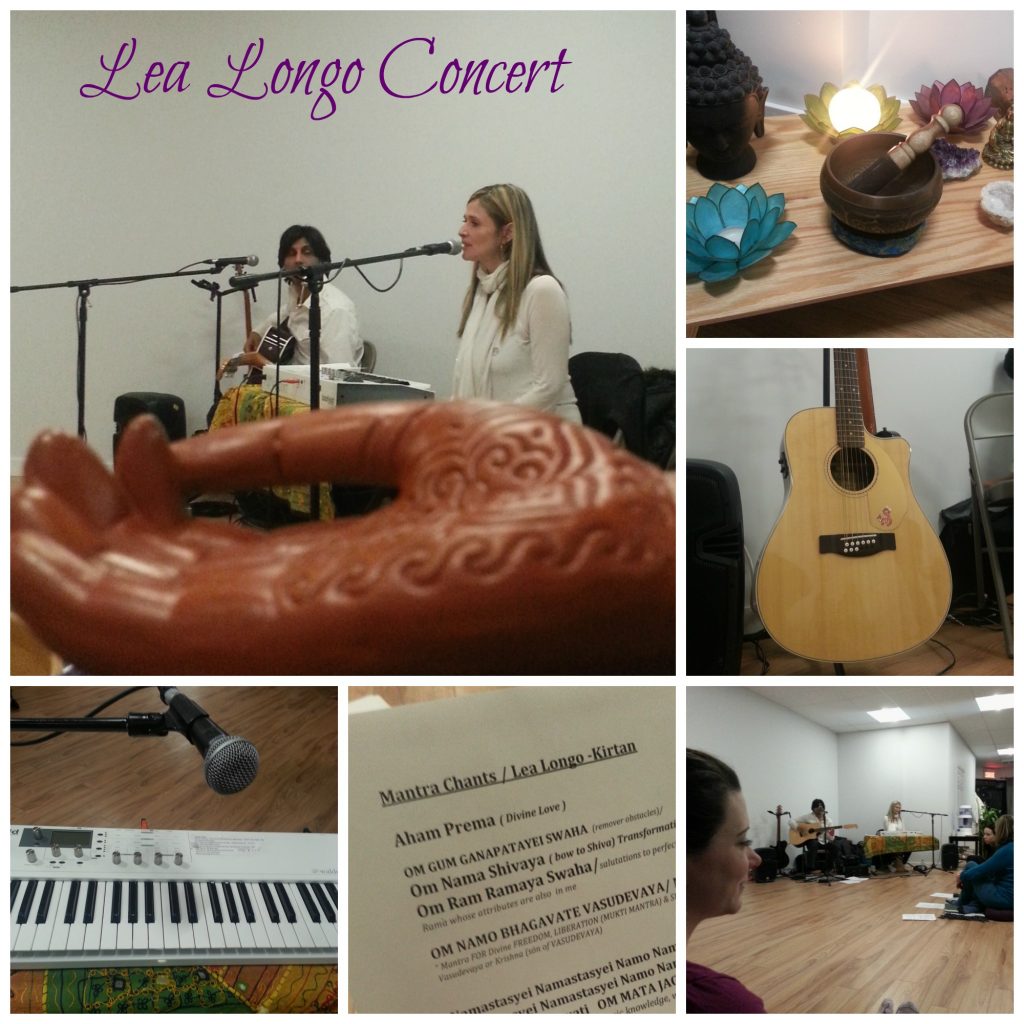 Lea Longo closed the grand opening with a beautiful chanting concert. Her cds are now available at the studio.

I would highly recommend trying out these and other classes at Anjali Mudra Yoga. It opened my eyes to different possibilities of relaxation and wellness. Making a conscious effort to better yourself inside and out is important, and it’s a great resolution to have for this new year.

Other classes include prenatal yoga, yoga for seniors, kids yoga (which my kids loved, more on that later), and beginner’s (Hatha) yoga. This is the only yoga studio of its kind in the area, and it will soon be a favourite to all. Registrations are ongoing and drop ins are welcome.

The yoga studio is located at 355 Boulevard Samson, Ste-Dorothée in Laval. For a full list of classes and weekly schedule, click here.

Are You Drinking Healthy Water?  A Zero...

Six Christmas Ornaments to Make with the...

Instead of braiding our palms, since we cannot have new blessed palms this year, we are going to try and make green gimp bracelets instead. Happy #PalmSunday everyone! #Hossana askmamamoe.com/palm-…