The CP Holiday Train Has Begun Its Journey! 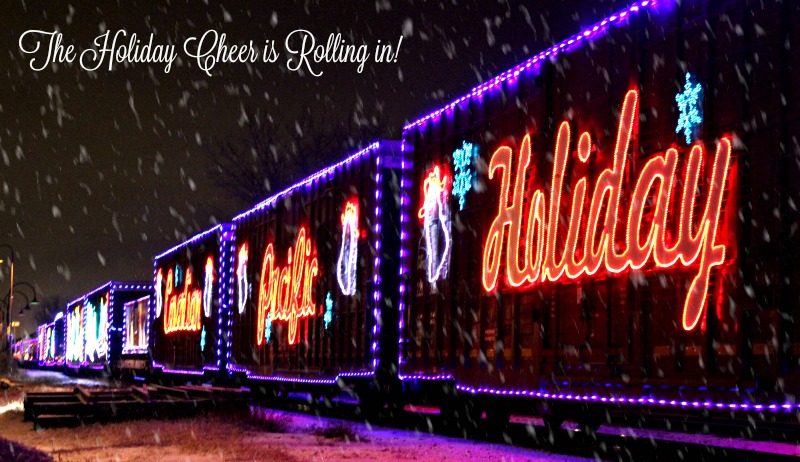 The first time we brought the boys to see the CP Holiday Train roll into our local train station was when they were just little. Their eyes lit up when they saw the train full of lights and heard the whistle blowing.

The very Canadian experience has been going on for the last 17 years, spreading joy with their colourfully decorated train, and cheery performances by Canadian musicians.

The journey begins in Quebec and our local train station just happens to be the first big stop on the tour. The Holiday Train has gained a lot more exposure in the last few years and crowds from all of Montreal come to see the event take place.

It was packed this year, and to be honest two out of my three boys were a little peeved at the crowd since they couldn’t see very much (the musicians perform on the train so it’s not that far off the ground). But my friend and I wiggled our kids slowly but surely to the front when people moved away and in the end, we were at the front of the stage when Santa arrived. The performance itself only lasts about a half hour, but we made the most of it be going with friends and enjoying hot chocolate together after.

What is more important than the show is the cause. The Canadian food banks are on site for each stop to gather money and food from all that attend. I have to be honest and tell you the first couple of times we went I didn’t bring anything. At first, it was because I didn’t know about it, and then it was because our kids were still young and needed to be lifted or carried.

This year, I made no excuses and purposefully went to the grocery store that afternoon with a list strictly for the food bank that was on site, Moisson Montreal.

On the CP Rail website, as well as on food bank websites, they recommend to donate the following items:

Each of my boys made a shopping bag full enough that they could carry. My husband took a few more, and so did I. And with our friends, we donated enough for a few families to have a good meal or two. As I brought our donation, I asked how things were going. Before the concert began, they had four large watermelon containers filled to the rim with donated food.

Last night’s @cpholidaytrain event was a success! @moissonmontreal received so much from the community. Before the concert began, they had 4 of these containers filled! Way to go, #Montreal !!! ???

People continued to bring food all through the event. In the end, The CP Holiday Train donated $15,000 to Moisson Montreal. What does that equate to? I contacted Gabrielle Marcoux of Moisson Montreal to understand. “The money donated by the CP Holiday Train will feed 960 families of four for 1 week.”  A total of 2986 kilos of food was also donated by families that came to the event. After a quick search, on average, people eat between 3-5 pounds of food a day. So this donation equates to 1658 meals. That’s wonderful! Now we have to keep going because:

In Montreal, there are 658,256 requests for food aid every month. As in, not just for the holiday season.

If you are lucky enough to have a train station that the CP Holiday Train stops at, I highly recommend going as a family. Just keep in mind that crowds can be a bit of a hassle for little ones, so be prepared to work your back and shoulders!

For a list of stops, and to watch an interesting and inspirational min documentary about the CP Holiday Train, visit their website.

If you are able to give this holiday season to your local food bank for those less fortunate, visit the Food Banks of Canada to find one near you.

No Really, How Do You Use The Internet? Online Safety with TELUS WISE

The Spark That Led To #SFTH13

Shopping From The Heart 2019 Under Way