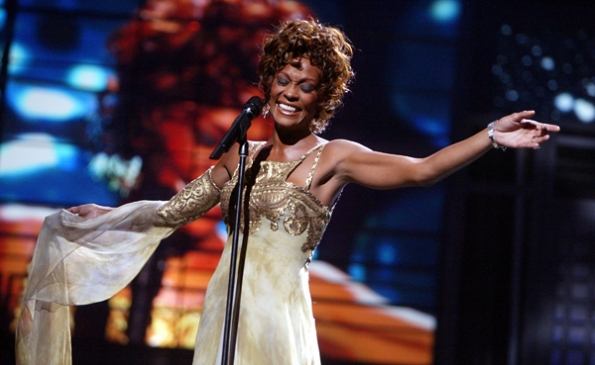 I had intended to only write Valentine posts leading up to the 14th. But, I couldn’t let this tremendous moment in music history pass without mentioning it.

When I was in grade school, my religion teacher brought in a song for us to hear from a new and upcoming artist. She put the cassette album into the school’s boombox and I was mesmerized. I listened with emotion and I was, in that moment, being inspired to achieve great things. The song was “The Greatest Love of All” song by Whitney Houston.

I couldn’t get my hands on that album fast enough, and after I did, I listened and listened. Every song was ingrained in my brain and every emotion was felt through her incredible voice. I may have not experienced half of the feelings she was portraying in her music yet, but her voice carried me into the stories of love, loss, and happiness. I was hooked.

Her second album that exploded with hits such as  “I Wanna Dance With Somebody” became my junior high internal anthem. In the 80’s, I wore Whitney Houston’s face on one of the buttons on my jean jacket with pride. I idolized her, and her music kept me inspired, album after album. I knew every word to every song and sang them with her on my yellow Walkman in our family station wagon. The music of Whitney Houston was part of my youth.

Whitney Houston will always have a special place in my heart. I won’t pretend to know her, or understand her, or fathom what she went through in her career, her marriage, or as a mother. All I know is that her voice reached me, as well as so many other people in this world. And just as this Internet gives me a voice to reach out to others in a way I still have yet to grasp, her voice will carry on further than her passing.

Ms. Whitney Houston left this world February 11th, the day before the 54th GrammyAwards. She was 48 years old.
If you are at my site, you are most likely a mama. And for this, I urge you to go ahead and listen to “The Greatest Love of All”. The words will move you as a mother. And Whitney Houston’s voice will move you in your soul. Here is an excerpt:
“I believe the children are our future

Rest in peace, Ms. Whitney Houston. And thank you for making my heart sing.

This Year is Going to Kick Last...

Crying as I read the words to this very song that always affected me, even as a teen. I sang this with a friend in one of those “record your own song” booths (karaoke-ish) in Niagara Falls so many years ago. Thanks for reminding all the mamas of these very special words.

Yes! The recording booths for teens! Now we have Amercian Idol…
It was an important song for me too. Thanks for sharing your memory.

Watched #Castaway last night with the boys. What a movie. Only @tomhanks could make us cry over a volleyball. #WilsonForever #familyfriendlymovie

Watching the news tonight as corona numbers continue to go up...My friends in #Florida and #Texas, I'm thinking of you.